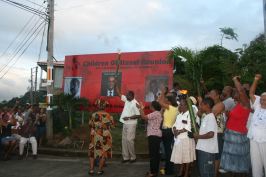 Roseau, Dominica – April  10 , 2008………The contribution of Dominica’s first Premier, Mr. Edward Oliver Leblanc  to the development of Vieille Case and Dominica must be recognised and documented.

The statement came from Prime Minister and Parliamentary Representative for the Vieille Case constituency, Hon. Roosevelt Skerrit at the formal launching of the Children of Itassi Reunion 2008 earlier this year.

“In my contribution today, I want to recognise the contribution of EO Leblanc to the development of Vieille Case and the whole of Dominica. Often we allow ourselves to forget those who have laboured in the vineyard for our own development. And Mr. Leblanc who came from humble beginnings  in Vieille Case made it on the national stage and even today many Dominicans who experienced the goodwill of Mr. Leblanc and his government are saying thanks,” said Prime Minister Skerrit as he addressed hundreds who gathered ” Under de  Mango” for the formal launching ceremony.

The Prime Minister also highlighted the major strides made in health, education and physical infrastructure during Mr Leblanc’s tenure as Chief Minister and Premier from January 1961- June 1974.

In his address, Hon. Skerrit also stressed that a legacy of this the second Children of Itassi Reunion should be “a document, a text highlighting the achievements of those who have made a contribution to Vielle Case and to Dominica” The Prime Minister made special mention of persons like EO Leblanc, Teacher Sorhaindo and a former Parliamentary Representative, Alexis Williams.

Information on the Children of Itassi Reunion 2008 can be seen on www.itassi.org.

The Children of Itassi Reunion 2008 is coming at a time when Dominica is celebrating reunion year this year under the theme “Celebrating the Journey Together”. 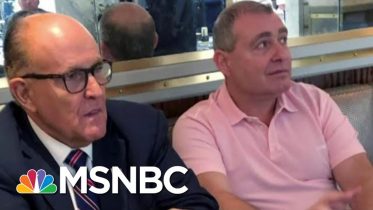 Betsy Woodruff of the Daily Beast joins to talk about her latest reporting: Lev Parnas says that the silence from Rudy Giuliani and the…