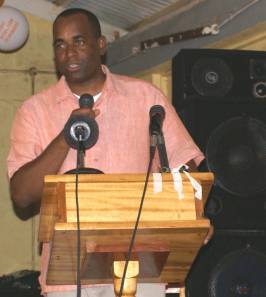 Roseau, Dominica – January 13, 2009………………On the invitation of organisers of the 2008 Thibaud Reunion, the Prime Minister, Hon. Roosevelt Skerrit addressed a Town Hall Meeting in the village of Thibaud in late December where he outlined the tremendous strides that have been made by his Government over the last several years, especially with respect to education and road infrastructure in the Vieille Case constituency.

According, Hon. Skerrit, who is also Parliamentary Representative for  the area  significant strides have been made in education, where many young persons from that part of the country  are being  granted opportunities to empower themselves irrespective of political or religious affiliation or socio-economic circumstances. Reference was made to the fact that there are countries in the world far richer than Dominica where children will not see a primary school let alone a secondary school.

The Prime Minister added that his Government achieved Universal Secondary Education (USE) two years earlier than planned (2005) so that every child who gets to grade six is guaranteed a place at a secondary school.

Hon. Skerrit also announced that the Thibaud Primary School would be demolished to make way for the construction of a smaller school funded by the Government of the Bolivarian Republic of Venezuela under the ALBA arrangement.

The Dominican leader also announced that water would soon be brought to the people in the hamlet of Morne Savon with funding coming from the Government of Dominica and the Caribbean Development Bank through BNTF. 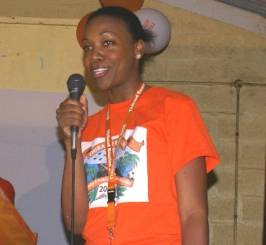 Strong emphasis will be placed on housing and the installation of washroom facilities in the village of Thibaud in 2009, Hon. Skerrit stated.

During the discussion segment of the Town Hall Meeting several villagers expressed their satisfaction with the performance of the Government and the Prime Minister in particular.

In his closing remarks attended by well over 250 persons, the Prime Minister stated: “I wish to congratulate and commend all those persons who played their part, the President of the Reunion Committee, Mrs. Royer  and all the other  persons who played their part in the community  and those groups out of Dominica  who coordinated the event. This has been a tremendous success of family and friends coming together in brotherhood and sisterhood and fellowshipping together. My urge to you is that this will be a springboard to greater things for Thibaud. It will be a springboard for greater unity within the community and a springboard for development in our beautiful village and of course Dominica.” 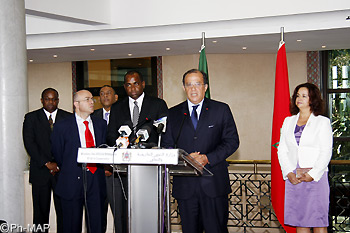 Rabat – The Commonwealth of Dominica has decided to withdraw its recognition of the so-called SADR, the country’s Visiting Prime Minister Roosevelt Skerrit said, on…

New Calls For Representative Steve King To Resign | All In | MSNBC