Negotiations between Canada and the 15 member-states of the Caribbean Community (CARICOM) on a Free Trade Agreement (FTA) are now in danger of ending without result on June 30 – a ‘drop dead’ date that both sides accepted toward the end of last year. After six rounds of negotiations since March 2009 – the last one being held in Canada in March 2014 – the Canadian government has reportedly told CARICOM governments that they should ‘raise their level of ambition’ or, on June 30, Canada will end the talks..

By ‘raising their level of ambition’, the Canadian government means that CARICOM governments should, among other things, commit to removing tariffs on Canadian goods imported into CARICOM markets, grant more binding protection for Canadian investment into wider areas of Caribbean economies, agree on rules that determine the true origin of products, and allow competition from Canadian companies to bid for projects in the region. Of course, there would be reciprocal arrangements granted to CARICOM companies into the Canadian market. But, given the relatively meagre resources available to Caribbean companies, they would hardly be able to take advantage of these arrangements, whereas Canadian companies, with considerably greater capacity, would.

CARICOM’s experience with the Economic Partnership Agreement (EPA) that its member-states signed with the European Union (EU), does not encourage Caribbean governments or the Caribbean’s private sector to sign another FTA, particularly one that will not contain a specific commitment to development assistance over a predictable period – and Canada has been reluctant to include such a commitment in the Agreement. This is not because the Canadian government will not provide development assistance to the region since it has already undertaken to do so separately; it is because Canada does not want to set a precedent for FTAs with other countries with which Canada is also negotiating.

In the event, what is at stake here? The reality is that in terms of trade in goods between Canada and CARICOM countries, not very much. Canada’s merchandise trade with CARICOM is less than 1% of its total trade, and CARICOM’s exports to Canada represent only 4% of its total export of goods. So, Canada has very little to lose in terms of trade in goods if it walks away from the trade negotiations. In 2012 (the last year for which reliable statistics are available to the CARICOM Secretariat), CARICOM enjoyed a trade surplus with Canada of US$735.1 million with only a portion benefitting from duty-free treatment under the existing Canada-Caribbean agreement.

The four CARICOM countries that enjoyed the greatest value from their exports to Canada in 2012 were Suriname, US$458.2 million; Guyana, US$401.9 million; Jamaica, US$261.2 million and Trinidad and Tobago, US$251.5 million. The larger portion of the exports of Suriname, Guyana and Trinidad and Tobago, principally gold, alumina, petroleum and natural gas, would not be affected whether or not an FTA is signed because they enjoy a zero Most Favoured Nation (MFN) tariff.

In 2009, Professor Norman Girvan (lately deceased) had pointed out the relative smallness of trade in goods between Canada and CARICOM and how little trade would be liberalized by an FTA between them. He had also signalled that if such an FTA gives Canada any more favourable terms than the EPA with the EU, the EU will be entitled to claim equal benefits from Caribbean countries, putting them at a greater disadvantage. In this connection, CARICOM governments would calculate that they have more to lose from signing an FTA with Canada that does not address their needs than in having no bilateral agreement at all.

Of course, the relationship between Canada and CARICOM countries goes far beyond trade in goods, and it would be in the interest of both sides to work diligently to maintain their overall beneficial relationship even if the current negotiations on trade in goods collapses on June 30.

As I pointed out in a commentary in January 2014, Canada is home to a significant number of CARICOM’s Diaspora; it is a major source of tourists to the region; and Canadian private sector investment in the region in a variety of industries, including banking, tourism and mining, is huge – direct investment is in excess of US$75 billion, and trade in services is roughly US$3 billion annually.

From Canada’s standpoint, CARICOM states have been natural allies with whom it shares traditions, values and a long history of connections at many levels. In a sense, these links are more valuable than trade in goods.

A greater effort should be made by both sides to settle an FTA with which they could both live. In this context, CARICOM governments might consider moving the current discussions beyond the trade negotiators who are hobbled in their work by too rigid mandates from their governments.

To lift the discussion and to try to save the negotiations, CARICOM governments might consider an initiative to send, within the next three weeks, an empowered delegation of decision-makers to talk with decision-makers in Canada, including the trade minister, to seek flexibility on the matters that both sides regard as crucial to them and that would allow them to conclude an agreement. It would be up to Canada whether or not it accommodates such an initiative from CARICOM governments, but at least CARICOM would have made the effort.

Simply announcing failure to agree on June 30 would not be good for Canada or CARICOM countries.

© Copyright to this article is held by Sir Ronald Sanders and its reproduction or republication by any media or transmission by radio or television without his prior written permission is an infringement of the law. Republished with permission.
www.sirronaldsanders.com

Be the first to comment on "Saving the CARICOM-Canada talks" 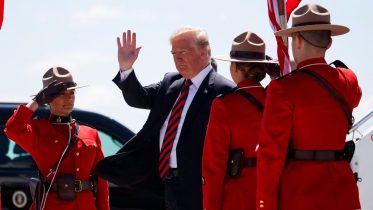