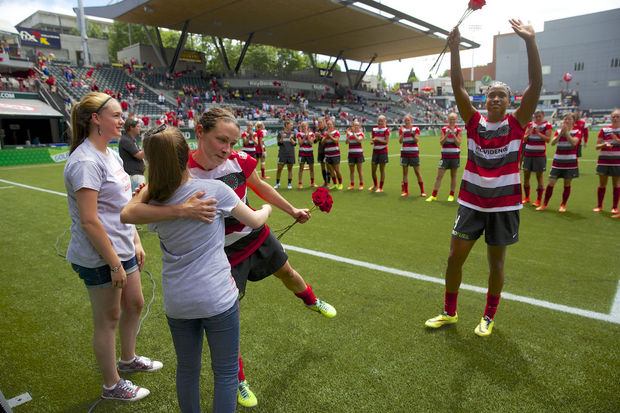 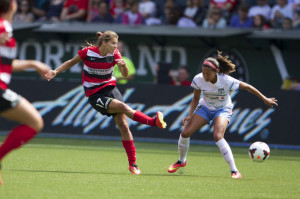 One minute, the Portland Thorns fans were serenading Karina LeBlanc. Minutes later, they were back to normal, issuing their usual chants toward the opposition.

The fans still hold the former Thorns goalkeeper in a special place in their hearts. LeBlanc and the fans exchanged goodbye waves after the Thorns’ 2-2 draw against Chicago on Friday afternoon at Providence Park.

During the game, the fans reminded LeBlanc that she is no longer part of the Thorns.

“Every time I hear that Karina chant, it’s special to me. Then they turned around and said, ‘Dodgy keeper!’ Then I heard someone say another time, ‘We love you!’ ” said LeBlanc, rocking a red and black mohawk hairdo. “They’re fans. They have to cheer for the home team. I didn’t take it personally.”

The sight of LeBlanc likely took the Thorns fans back to the 2013 season, when the Thorns won the inaugural NWSL championship with LeBlanc in goal. She finished the season first among goalkeepers with 11 wins, second in saves and fourth in goals-against average.

Her performances were stellar, yet it was more than just helping the Thorns win the league championship that endeared LeBlanc to soccer fans.

It’s LeBlanc’s energetic and bubbly personality. Her smile was a constant presence on the team.

“She always has a smile on her face and she brings a lot of energy,” said Thorns forward Christine Sinclair, a close friend of LeBlanc. “KK is one of those type of players you need to have on your team.”

The Thorns traded LeBlanc to Chicago in exchange for a second-round pick in the 2015 NWSL College Draft in January. The move came after the Thorns announced they had acquired German goalkeeper Nadine Angerer, the winner of the 2013 Ballon d’Or, given to the best professional women’s professional soccer player in the world.

Knowing she was going to play backup to Angerer, LeBlanc preferred to remain as a starter, and the Thorns moved her to Chicago.

The Red Stars are currently 6-6-3 (21 points) after the draw at Portland. They will host the Thorns (6-6-3, 21 points) in the second game of the home-and-home series Wednesday night, a game with significant playoff implications.

LeBlanc, 34, is fourth in the NWSL in wins with six, fourth in saves with 42 and third in shutouts with three during the 2014 season. The draw against the Thorns, in which the Red Stars rallied from a two-goal deficit, stopped a five-game winless streak and kept the Red Stars firmly in the playoff race.

“The biggest thing that we walked away feeling is that we showed some character,” LeBlanc said. “We had lost the last couple of games, so for us, this is huge moving forward.”

LeBlanc and the Red Stars have nine games remaining in the regular season, including a third game against Portland at home (July 17). They are hoping to earn a playoff berth after finishing tied for fifth in 2013.

Perhaps LeBlanc will make another visit to Portland during the 2014 season, which would be in the playoffs.

“When I walked out there, they’re on their feet clapping for me. It’s a special feeling,” LeBlanc said. “I remembered why I played for these people.” 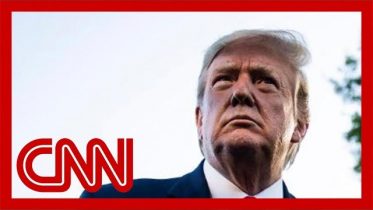