NEWARK, NJ.  Efforts to further establish Dominica as the Peaceful Nature Isle of the World is being advanced this weekend (May 13-15) at the Newark Peace Education Summit which brings together leading peace educators and practitioners from around the world to participate in a series of panels and workshops intended to highlight “the power nonviolence” in modern society and develop mechanisms to improve capacities for peace around the world.

The event is organized mainly by the Tibet House, and The Drew A. Katz Foundation, and includes presentations by the Dalia Lima and several other Nobel Peace Laureates. The large presentations will then be followed by small focused workshops where participants will learn about recent peace innovations, and share their approaches with others.

Among such workshop participants is Dominica born and Chicago based internationally noted  criminologist  and sociologist, Dr. Peter K. B. St. Jean who will be discussing his new initiative entitled Peaceful World Movement whose first ever implementation was in Dominica on April 12th 2010, and has so far taken roots in Buffalo NY (October 19th 2010), and Chicago (February 19th 2011).  The mission of the Peaceful World Movement is to develop a Peaceful World Industry as a sustainable antidote to violence, crime, and their related problems.

Dr. St. Jean believes that the Summit of this weekend will provide him and his team with yet another opportunity to educate the world about this unique approach which focuses on the economic power of peace. He will highlight the work already done with others in Dominica and outline the key ideas of the Peaceful World Movement.

At the end of the last day of the Summit (Sunday May 15th), Dr. St. Jean is hosting a session on “Increasing Pockets of Peace in Your Life” at the Bishop Taylor Manor located on 33 N. Walnut St, East Orange, NJ. At that event, he will show two of his recent video documentaries, Lessons from Homicides: The Buffalo Story, and Peaceful Dominica: Prospects and Concerns. The event will also include a cultural performance by the New Jersey based Dominica cultural education group, Know Your Culture; a post movie discussion; and summary of the key accomplishments of the Newark Peace Education Summit. Dr. St. Jean hopes that the East Orange session will begin the implantation of the Peaceful World Movement in New Jersey and strengthen the base already set in Dominica and the other locations. He believes that his action plan for developing the economic value of peace is one of the most promising approaches to accomplish sustained reductions in crime, violence, delinquency in society. Updates will be provided at www.peacefulworldmovement.org. END. 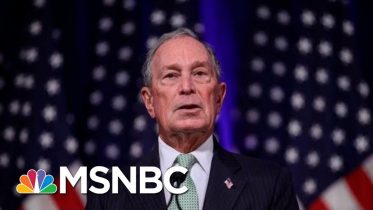 The NY Times' Taylor Lorenz joins Hallie Jackson to discuss how Mike Bloomberg is paying influencers to post memes for his campaign. Aired on…

Obama Official On Go Back Remarks: Learn From History’s Mistakes | The Beat With Ari Melber | MSNBC

TOR for the CEPF Project