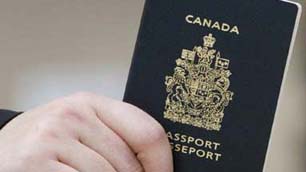 The federal government rolled out some details of its new 10-year electronic passport on Tuesday, saying that Canadians who know about the new document seem to like it.

“Generally Canadians are not aware of the project by the government of Canada to adopt the new passport, nor do they know exactly what the passport consists of,” a survey released by Passport Canada indicated.

But the idea of the microchip-equipped passport, which offers a choice of validity of five or 10 years, “experienced significant support,” the survey said.

The new passport will contain a photograph but not biometric data such as fingerprints or iris scans.

“The goal of the validity period of 10 years is not to reduce costs but to be more convenient for Canadians, to get Canada to the same level as a growing number of countries such as the United States, France, the United Kingdom and Australia,” said Monique Boivin, a Passport Canada spokeswoman.

She said about 80 countries issue e-passports and “Canada is the only G8 country not to issue electronic passports to the general public.”

Boivin said Canada chose not to include fingerprints and iris scans, which weren’t needed to comply with the standards of the International Civil Aviation Organization.

“Right now the ICAO standard is the facial image,” she said.

The Passport Canada survey said about 55,000 Canadian passports were lost or stolen in 2008-2009. The country issued 4.38 million passports in the same period.

Boivin said there are 19 million passports in circulation and those stolen “represent a very small, tiny portion of what is outstanding at this time.”

There have been some suggestions that Passport Canada raise the price of replacement passports for those lost or stolen rather than pass the cost on to everyone.

Boivin said a final proposal will be developed that will set the costs and standards and be sent to Parliament for approval. Once that’s done, the new electronic passport could be implemented from 2012 onwards.

However, some people have raised concerns about privacy issues.

The Canadian Civil Liberties Union worried about the confidentiality of information contained on the passport’s microchip.

“Some feared that the passport chip could lead to surveillance and monitoring of Canadians by unauthorized parties,” the group said.

Boivin said an awareness campaign will be conducted to “reassure” Canadians about the confidentiality of data.

She noted the passport has to be opened to the second page to be scanned unlike other documents such as a driver’s licence. It also must be held close to the computer drive to be read.

The passport agency acknowledged that there is an upward trend in states for adding other biometrics, such as fingerprints and iris scans for security.

The Employers Council, which was also consulted by Passport Canada, welcomed the adoption of the e-passport because it lengthens the validity period, reduces paperwork and eases mobility.

Be the first to comment on "New electronic passports unveiled"

LaPlaine, the rural southeastern agricultural constituency, which has been represented by the UWP opposition leader, Mr Ron Green, for past fifteen years, was ‘ground zero’ in the recent Dominican elections. The Prime Minister pumped undisclosed huge sums of money into the constituency, airlifted Diaspora Dominicans and gave out handouts to voters in a vicious attempt to buy, win, steal or take the constituency and deliver a knockout punch to Mr Green.

What’s Masai Ujiri’s new plan for the Raptors now that Kawhi is gone?