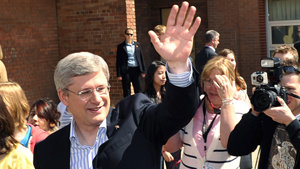 The NDP, according to projections, made a major breakthrough and appeared to have nearly tripled their seat count, while Michael Ignatieff’s Liberals — often touted as Canada’s “natural governing party” — were poised to suffer an historic electoral loss, placing a distant third behind Layton’s party.

As of 11:10 p.m. EST, the Conservatives were elected or leading in 167 seats, followed by the NDP with 105, Liberals with 33 and the Bloc with two. A party needs to capture 155 seats to win a majority in the House of Commons.

Ignatieff himself trailed in his Toronto riding of Etobicoke-Lakeshore, based on early reports that also showed several prominent Toronto Liberals behind NDP or Tory candidates.

Liberal candidate Bob Rae, a former leadership rival of Ignatieff who led in his riding of Toronto Centre, said his party must “recognize the message Canadians have delivered.”

“It’s a message we have to receive, and take it all in,” Rae told supporters after the Harper majority was declared.

Some of the province’s highest-profile politicians were at risk of losing their seats. Bloc Quebecois Leader Gilles Duceppe was trailing behind NDP candidate Hélène Laverdière in the riding of Laurier-Sainte-Marie, in what was shaping out to be a disastrous night for the sovereignist party. Despite projected overall Tory gains, Lawrence Cannon and Jean-Pierre Blackburn, who served as ministers in Harper’s cabinet, were defeated in their Quebec ridings.

In the battleground province of Ontario, early results showed the Conservatives coming on strong and leading in much of the province. Conservative Chris Alexander defeated Liberal incumbent Mark Holland in the coveted Greater Toronto Area riding of Ajax-Pickering. The Tories are also holding their existing seats and leading in some key Liberal-held ridings such as Brampton West, Brampton-Springdale and Eglinton-Lawrence.

The NDP was also holding its existing seats, according to the earlier results.

According to other results, Conservatives and NDP appeared to make gains in Atlantic Canada at the expense of the Liberals, who have won the most seats in the region in every federal election since 1997. The Conservatives had 38 per cent of the vote, compared to 30 per cent for the NDP and 29 for the Liberals.

Be the first to comment on "Harper wins majority" 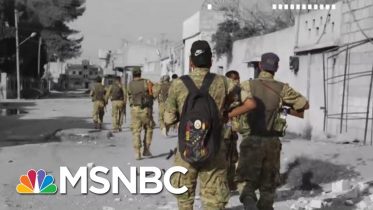 A sustained Turkish military operation against U.S.-backed Kurdish forces in Syria — which Trump appears to have permitted — would vastly increase the threat…

Julián Castro On Debate: We Didn’t Talk About Immigration, Housing | All In | MSNBC

Klobuchar clashes with Warren on health care: There’s a difference between a plan and a pipe dream