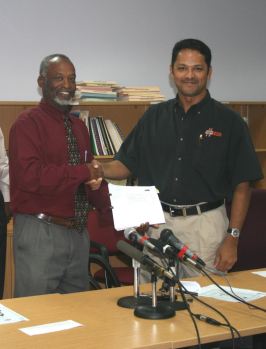 Roseau, Dominica – April 30, 2008……. Stakeholders in the Tourism Industry in Dominica as well as residents of the Roseau Valley are elated following the signing of a contract valued at $22.3 million ECD to upgrade and rehabilitate the roads leading to the major tourist attractions in the Roseau Valley, including Bath Estate to Trafalgar, Laudat to Trafalgar, and the St. Aroment Spur Road.

On Monday, April, 28, 2008, a contract was signed between the Government of Dominica and Dipcon Engineering Services Limited of Trinidad and Tobago for the Road Improvement and Maintenance Project (RIMP).

The Road Improvement and Maintenance Project was developed from a need to improve road standards through new construction and efficient maintenance.

According to Minister for Public Works and Infrastructural Development, Hon. Ambrose George, the works will consist of:

·        Drainage works to include the improvement or construction of concrete box drains, culverts, concrete and earth drains

The construction is scheduled to begin in May, 2008 and is expected to continue for a period of    one (1) year.

The Roseau Valley has many of Dominica’s most popular tourist attractions, including the Trafalgar

Meanwhile Prime Minister and Minister for Finance, Hon. Roosevelt Skerrit has revealed that the Ministry of Public Works and Infrastructural Development is now reviewing the tender documents for the first phase of the Canefield-Melville Hall Road project, with a view to selecting a contractor within the next few weeks.

The first phase of the project (Canefield-Pond Casse) is expected to cost in the region of $25 million. The entire Canefield-Melville Hall Road project is being financed with funds from the French Government and the Government of Dominica.

Be the first to comment on "GOVERNMENT SIGNS $22.3 MILLION CONTRACT FOR VALLEY ROADS ROJECT"

Doctrove calls for an increase in ICC Elite umpires

ROSEAU, Dominica (CMC) – Retired ICC Elite Panel umpire, Billy Doctrove, believes that the time is ideal for an increase in the number of umpires…

President Trump: I don’t blame China, I blame past leadership