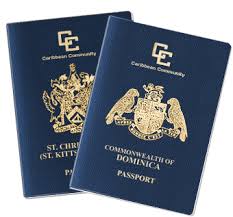 Lennox Linton is the Leader of the Opposition in the Commonwealth of Dominica, an independent island-state in the Caribbean with just 72,000 inhabitants (not to be confused with the far larger Dominican Republic). A former journalist, the head of the United Workers Party is noted for his vocal criticism of the government, which he frequently accuses of corruption.

Like several other countries in the region, Dominica runs an economic citizenship programme enabling foreigners to acquire citizenship of the island and the passport to go with it by paying money into a state fund or making a sizeable real estate investment. The country’s passport policies have in the past occasionally raised eyebrows abroad – and are currently a hot topic in Dominica’s highly polarized domestic politics.

I spoke with Lennox Linton about his repeated allegations that senior government officials are corruptly selling passports to criminals, about who is to blame for his country’s lack of Freedom of Information legislation, and about what changes he would make if his party came into power. Note that I did not fact check any claims made by Lennox Linton during this interview; all facts and opinions reproduced here are his own.

Q: As Leader of the Opposition, you’ve frequently and vocally criticized your country’s “Citizenship by Investment” programme. Why?

There’s a complete lack of accountability. How many people are getting our passports? What money is flowing? We’ve not seen those numbers. For example, for the 2014-15 budget, the government forecast an income from the Citizenship by Investment programme of EC$80 million, but then it said it only received EC$25million. So why are they forecasting an income of EC$70 for the current [financial] year? [Note: One EC$ or East Caribbean Dollar equals approximately 0.37 US dollars.]

Now there’s the new [investment] programme, which is mainly hotels. In the 1990s, we had the Layou River Hotel project, which was similar. Some people, mainly foreigners, made millions and millions, but there still is no hotel, and no jobs were created.

Q: Why this focus on diplomatic passports?

The diplomatic passport selling business is different from the Citizenship by Investment programme. This money is not going into the treasury, it’s going into the pockets of corrupt officials. People are purchasing [diplomatic] passports and diplomatic immunity. Alison [disgraced former Nigerian oil minister Diezani Alison-Madueke] bought a diplomatic passport and bought a position. She’s done nothing with that position [of “Trade and Investment Commissioner for Dominica”] that I’m aware of, we didn’t even know about this until five months later [when police in London arrested her]. It was the same with [Francesco] Corallo in Italy, when police came to arrest him, he claimed diplomatic immunity. We only ever learn about who gets our diplomatic passports afterwards, through Google.

The evidence is clear as daylight that our government has been selling diplomatic passports to crooks and criminals.

Q: I haven’t seen any evidence yet. Where is the evidence that money changed hands?

Alison [Diezani Alison-Madueke] wound up with a diplomatic passport within six days of meeting [the Prime Minister of Dominica, Roosevelt] Skerrit. The police found millions in cash in Alison’s house. [Embattled Macau billionaire Ng] Lap Seng said in a U.S. court that he got a diplomatic passport because he had promised to invest twenty million dollars in Dominica. The evidence is circumstantial.

Get the full scoop

Be the first to comment on "Diplomatic Passports For Sale, Claims Dominica’s Opposition Leader"

Roseau, Dominica – August 19, 2009………The  legislative and administrative impediments affecting the  smooth implementation of the CARICOM Single Market and Economy (CSME) in Dominica  were identified at a Review Meeting held in Roseau recently.

The Review Meeting also featured an overview/status of implementation of the CSME within the Member States of the Caribbean Community as a whole. The presentation was done by
Ms. Wanya Illes of the CSME Unit in Barbados. Dominica’s Director of Trade, Dr. Eisenhower Douglas delivered the opening remarks.

Top US general: Iran tried to kill US troops, some officials believe they purposely missed

How to make an election attack ad