Much has been discussed and written about my response to Mr. Astaphan a few weeks ago, including a five-page letter by Mr. Astaphan. One of the central points made relates to my refusal to print his reply in this paper. I have three reasons for that decision. One: Mr. Astaphan wrote the editor of The Chronicle with the question, “Will you publish my response to Mr. Frank Baron with the same prominence given to his?” I construe this as a thinly veiled demand that we not only print the reply but that we place it on the front page. Mr. Astaphan, I cannot come to your office or place of business and demand anything. Why then should you be able to do the same with me?

Two: I have been described as arrogant for refusing to print your article. Let me refresh your memory. After my concerns were expressed in The Chronicle in December 2009, persons were conscripted (you know by whom!) to attack me. Mr. Astaphan, I printed all these articles in The Chronicle, including your own.
Three: Mr. Astaphan, you and Mr. Savarin had a programme on Kairi FM during the elections. I thought you had your pyjamas at the station because the programme lasted so long. Again, I was mercilessly savaged on your programme. Mr. Astaphan, did you allow a single caller from the opposition to participate in your marathon programme? Did you allow a single dissenting voice on it? What then gives you the right or moral authority to DEMAND that I do anything?

You have written about your excellent record as a lawyer. Not only am I aware of it, but I applaud you for it. You are bright, intelligent, diligent in your research and a worthy advocate. Your legal abilities place you among the likes of F.O.C. Harris, Jenner Armour, K.H.C. Alleyne (all of blessed memory) and Dominican Oxford trained Emile George. Telford Georges was clearly in a league of his own.

Take for example, the pink villas. They were developed by a company called Blair Court properties with no known income or assets. The company spent hundreds of thousands of dollars developing the villas before taking loans to continue the development. The man who claims ownership, a man called ‘Bubbles’, has only had sporadic employment including crab hunting.

Mr. Astaphan, do you believe for a single minute that crab hunting could be so lucrative that it would give ‘Bubbles’ the wherewithal to spend hundreds of thousands of dollars to develop these properties? If crabs could fetch that much money Mr. Astaphan, every ‘touloulou’ or soldier crab would buy wrongful death insurance in Dominica!

Bondye O, Mr. Astaphan! Where is your intelligence when the truth is assaulting you right in the face? It has taken seasoned businessmen years to develop properties and lots of borrowed money. I know because I built the Sisserou Hotel. ‘Bubbles’ can do so with little or no viable sources of income. This is beyond absurd! It is ridiculous!

You talk about my new found friends. I guess anyone who speaks of wrong doing is no longer considered a friend. That’s fine. Mr. Astaphan, some of my friends I have known for over 50 years. What am I doing with new friends, nuh garcon? Again, you are missing the point. This is not about party or new friends. It is about Dominica. It is about whether we have a democracy or a kleptocracy. It is about the dignity of our people. It is about building a nation of hardworking people. It is about following the fine examples of hard working men and women. It is about the man on the street who would rather work for a living than beg for it; the fisherman who would rather catch coulihou than sell cocaine; the school boy who spends his time studying than skylarking; the man who would rather plant dasheen than steal it; the lawyer who diligently represents his client yet disassociates himself or herself from any wrong doing. Go ask Mr. Glen Emmanuel, Mr. Astaphan, if you don’t know what I mean.

Mr. Astaphan, you note that people have criticised me privately and publicly for my “tendency for the pejorative”. I confess that initially, I did not know what pejorative means. I stupidly thought it was pigeon peas. I have heard you on Kairi FM. I have heard you on the “Hot Seat”. I have been advised and if I may use a big legal phrase, “verily believe” that you demonised people by calling them “cockroach” and “cacador” on a political platform. Mr. Astaphan, are you sure you want to lambast my “tendency to pejorative?”

Honesty matters, Mr. Astaphan. When a shoplifter gets caught at Astaphans, you do not hug him and say to him: “Come again brodda. Bring a friend.” You prosecute him. Corruption in public office, my good friend, should be treated no differently. Don’t you think we deserve a little better?

I predict that one day, dear Tony, you will be forced to use every iota of your much vaunted intellect to scrape in vain for believable answers to the questions I asked of you. This is because they continue to cry out for answers and they will continue to bug you, notwithstanding the 9000 or more words you threw up as a smokescreen. Oh mountain, you have laboured to produce … a mouse!

Be the first to comment on "Tony – The Mouse? Baron responds" 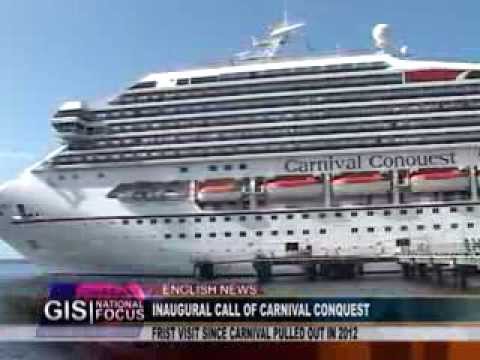 Sen. Kamala Harris: We Have A Criminal Living In The White House | MSNBC