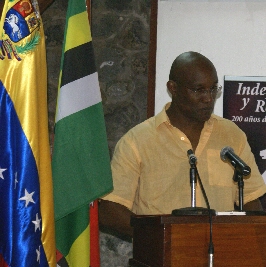 Roseau, Dominica- May 7, 2010………Dominica’s Ambassador to the Bolivarian Republic of Venezuela, His Excellency, Dr. Philbert Aaron has stated that the relationship that Dominica now enjoys with Venezuela would not have been possible without the  bold actions of Simon Bolivar who liberated Venezuela and Latin America from Spanish colonial rule.

Dr. Aaron made the revelation at a lecture by Dominican historian Dr. Lennox Honychurch on the topic: Simon Bolivar and the Independence of Venezuela and Latin America at the Old Mill Cultural Centre recently.

” It is for us in Dominica and definitely for the Government of Dominica a very  happy occasion. It is an occasion that is full of meaning for all of us…. that the events that took place, beginning 200 years ago, across the Caribbean sea, would have tremendous impact on so many lives. This relationship that we have today with the Bolivarian Republic of Venezuela could not have been possible without the bold actions taken by so many actors including the liberator Simon Bolivar 200 years ago.”

Dr. Aaron, who is also Dominica’s Ambassador to the ALBA, added that it is ” a testament to the kind of event that took place over 200 years ago that this relationship descends from abstraction and touches Dominican lives  in the most  concrete ways in matters of sea defence, in matters of help in times of disaster, in matters of energy and in other  areas of day to day life”.

The ALBA Ambassador added that despite the criticisms of Dominica’s bilateral relationship with Venezuela, the Dominica Government remains committed to the relationship.

Dr. Aaron also paid tribute to all those who made sacrifices for the liberation and independence of the Venezuelan people.

” In honour of that relationship as well as in honour of the sacrifices of all those who have struggled for Venezuelan independence, all those who have struggled for the dignity of the Venezuelan people, I have to say on behalf of the Prime Minister, on behalf of the  Government, Your Excellency, thank you very much for the  conduct of that relationship and please note that we understand that Venezuelan independence in no small measure strengthens Dominica’s independence. We know that, we appreciate that, ” Dr. Aaron concluded.

Also in attendance at the public lecture were President of Dominica, His Excellency, Dr. Nicholas Liverpool and Mrs. Liverpool, Ambassador of the Bolivarian Republic of Venezuela to Dominica Her Excellency, Carmen Martinez de Grijalva, Members of Cabinet, students from the Dominica State College, staff from the Cultural Division and officials from the Venezuelan Institute for Culture and Cooperation. 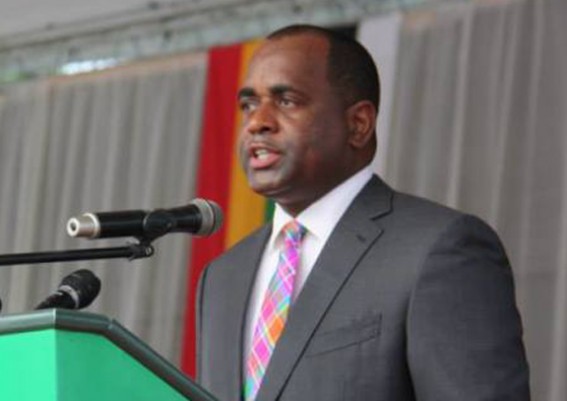 Is Scheer at risk of losing the Conservative leadership?

DOMINICA-POLITICS-Opposition walks out of Parliament