Mrs. Josette Borel-Lincertin, 1st Vice President of the Regional Council of Guadeloupe will arrive in Dominica on Friday, April 11, 2008 to sign a Transnational Agreement with the Government of Dominica that will support the further development of Dominica’s geothermal resources. The Signing ceremony will take place on Friday, April 11, 2008 at 9.30am in the Cabinet Room, Office of the Prime Minister, Financial Centre, Roseau.

The Government of Dominica has concluded negotiations for a Transnational Partnership Agreement with the Regional Councils of Guadeloupe and Martinique and other French development agencies, for the execution of a project that will undertake a series of activities under the “Geothermal Energy in the Caribbean Islands” project. The project is funded under the INTERREG IIIB programme of the European Union’s Caribbean Space Initiative, and is a multipartite arrangement with the following as partners: Regional Council of Guadeloupe, Regional Council of Martinique, the French Agency for Environment and Energy Management (ADEME), the French Geological Survey (BRGM), and Dominica.

The tasks to be undertaken under the project include geological, geochemical, and geophysical analyses of the natural features and environment of the Roseau Valley and the Wotten Waven areas. The project also provides for the undertaking of an environmental impact analysis and the study of the legal issues relating to the construction of submarine cables for the transmission and sale of geothermal generated electricity to Guadeloupe and Martinique.

The project builds upon the results of an OAS funded study that was undertaken in Dominica in 2005, which proposed the best possible geothermal “fields” in the subject area. The Interreg III B project will provide additional preliminary information that will support a wider EU funded project that is designed to “prove” the quantity and quality of the geothermal resource in Dominica through resource characterization and test drilling on site over a period of two years.

Total cost of the project under the Transnational Partnership Agreement is approximately 1.5 million euros, with partners in the project pledging to contribute a total of just under 654,000 euros. The remainder of the funds will come from the European Regional Development Fund (ERDF).

Minister for Energy, Honourable Charles Savarin, who will sign the Agreement on behalf of Dominica, says, “… cooperation between Guadeloupe and Martinique and Dominica in the development of the geothermal resources of Dominica is critical to the maximization of the benefits of such development as Guadeloupe and Martinique represent major markets for electricity thus generated. Further, such cooperation could set the stage for much closer cooperation in many other areas of mutual interest”.

Dominica will participate in various activities including the legal analysis, environmental analysis, land identification and management, public information, public awareness, and other “in kind” contributions.

Dominica is believed to have excellent reserves of geothermal energy, which is sufficient to supply all of Dominica’s electricity needs for a long time to come, and to supply the export markets of Guadeloupe and Martinique, in the first instance with some 40 Mega Watt of electricity each.

Preliminary investigations suggest that the ideal investment for the development of geothermal energy should plan for the production of at least 100 Mega Watt of electricity within the next five years, and at a much lower cost than it is currently being produced, thereby providing an additional inducement for private sector investment. Dominica’s current demand for electricity is approximately 14 Mega Watt.

The tasks under this project will be completed by the end of October 2008, by which time the European Union funded project would have started. 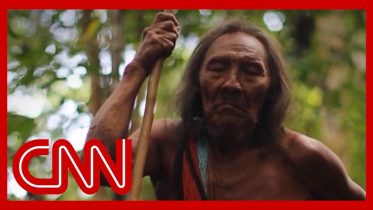 Their way of life in the Amazon rainforest may become extinct

The Waiapi tribe's way of life is under threat as the Amazon Rainforest burns and the government attempts to take over indigenous lands. CNN's…