A man known for his scintillating oratory, rescuing Ross University, rebuilding the Labour Party and championing the struggles of the poor and downtrodden

The milestone of the 20th anniversary of his death (April, 30th 2012), is an opportunity to reflect on the life of Mike Douglas, a man who will long be remembered for his scintillating oratory; his role in rescuing Ross University; his struggles for the poor and downtrodden and his mission to revitalize the forces of Labour following the Freedom party landslide of 1980.

Mike was a faithful son, father and national hero. His efforts would have gone nowhere, but for the rock solid love and nurturing of his wife, Olive “Nurse” Douglas who served the poor and the sick with great compassion and skill, while her husband exercised a brand of mesmerizing political wizardry. Though political life can be bruising on any family construct, he loved all his children and gave them the best he had: an example of a Dominican patriot.

Mike Douglas was the most brilliant debater of his generation. The book In Search of Eden by Gabriel Christian and Irvin Andre sums it up best: “Mike’s oratory exuded the persuasive logic of [his father] R.B. Douglas; the irrepressible wit of John Showline; the bravado of A.B. Hector; the assertiveness of John Royer and the nonchalance of Isaiah John.” His superb oratory was most in evidence in parliament during the 1980-85 period when -singlehandedly and fearlessly – he took the fight to the Freedom Party Government when the Labour party was at its weakest.

Mike was also a brilliant platform speaker. His presentations combined serious issues with humour in English and Creole. In the campaign for the 1975 General Election, Mike taunted the opposition: “We shall confound their politics, frustrate their dirty tricks and give them endless licks.”

Mike served with distinction in cabinet, promoting the sale of Dominica’s citrus to the UK, with his “Grapefruit the Great Fruit” campaign. A graduate in production engineering during his sojourn in the UK, and a competent technocrat, his stints in the Ministries of Agriculture, Communications and Works and Finance were well regarded.

Following his dismissal as a Minister in the Patrick John Government in 1978, he held 40 meetings across Dominica where he exposed the corrupt and dishonest activities of the Patrick John/Leo Austin dictatorship and the lack of democracy within the Labour Party and cabinet. Mike was also at the forefront of the campaign to force the John Government to cancel the Free Port Agreement, an arrangement that would have created a state within a state with the investors having their own police force, port facilities and utility arrangements.

Having served with honour in the Royal Air Force in trouble spots such as Cyprus and Aden, he brought his wisdom to the table during the tumult following the bloody events of May 29, 1979. His stalwart support for a constitutional settlement to the crisis via the Committee of National Salvation ensured that the rule of law, not brute force, became the mark of governance in Dominica. His diplomacy after that divisive crisis was such that he was able to weld the Dominican left into the fold of the old Labour Party.

He championed the struggles of the working class of Dominica and was on the side of banana famers, lighter men, women banana carriers, students, the homeless and the unemployed. He continued the relationship with Cuba, started by the Popular Independence Committees of Rosie Douglas, and so allowed for the scholarship programme with that country to flourish.

Though an opponent of the Freedom Party administration of Eugenia Charles, he urged the disclosure by Algie Maffie of the 1981 Operation Red Dog mercenary plot. That scheme to invade Dominica and topple the island’s government by US Nazi Party and KKK sympathizers was thwarted. But for the wise intervention of Mike, Rosie and Maffie, many Dominicans would have lost their lives.

Championing the vision of a reconstituted Dominica Labour Party from the mid-1980s, Mike diligently laid the structure for a disciplined party with a strong focus on good governance and transparency. He believed that Dominicans should control the natural resources of the state; that every Dominican should own a piece of the “rock.” In his last interview, though stricken with cancer, he called on Dominicans with these words: “Pa quitay yo por Domnik hod nou! “[Don’t let them take Dominica from us].

The Labour Party’s present constitution which describes the Labour party as a Democratic Socialist organization was largely the work of Mike. He identified a committed team of players who worked tirelessly towards the eventual goal of victory at the polls, achieved finally in January, 2000.

Mike unambiguously outlined the foreign policy position of the Labour party. At the party’s convention in 1986 he quoted from his party’s constitution which states that the party will “follow an independent policy of non-alignment and resist becoming a satellite of other nations.” Referring to the United States, Britain, Cuba and the Soviet Union, Mike concluded: “But we shall not become a toy of any one of them or a puppet of any one of them.”

Mike passionately believed that every Dominican, irrespective of their background should be given the opportunity to succeed and promoted the socio-economic fairness concept “All Shall Eat”. In an address to labourities at Portsmouth in 1986, he said: “Not some shall eat but ‘All Shall Eat’.”

Though he lost two general elections as leader of the Labour party, in 1985 and 1990, in the town of Portsmouth, Mike was unbeatable. He first won the Portsmouth seat in the March 1975 General Elections. He famously beat Charles Savarin in three consecutive general elections with increased majorities at each election.

It was Mike Douglas who very early saw the economic potential of Ross University. He rescued the struggling institution at Castaways and persuaded Robert Ross to move the School to Portsmouth. Leading figures in the Freedom Party Government including the Minister for Health and senior medical professionals in Dominica did not see Ross University at that time as a legitimate medical institution. Mike was instrumental in making it possible for Ross University to establish itself at Picard.

In his contribution to the debate on the 1980-1981 Budget Address, Mike stated: “Ross University spells economic development to the people of Portsmouth.” Today Ross University is the largest offshore medical school in the world employing several hundred Dominicans.

The role of Mike in securing land in Chance for housing expansion in the Town of Portsmouth must also be revisited. It was Mike as a Minister of Government who ensured that 35 acres of land at Sugar Loaf Estate was acquired.

Mike encouraged poor landless people to move into Chance. An abiding memory of Mike Douglas was when he stood in front of bulldozers and the police to prevent the removal of homeless persons who he had encouraged to squat on state lands in Chance from being evicted. In the end the Freedom Party government retreated. This was to mark the beginning of the mass movement of people into Chance.

Mike Douglas was part of the multi-party negotiating team that travelled to London in 1977 to hold discussions on crafting the post-independence constitution for Dominica. Along with Rosie and the Popular Independence Committees, he supported and campaigned for political independence for Dominica.

On this the 20th anniversary of his death, the contribution of Mike Douglas should command our attention. Apart from his tangible achievements, Mike also possessed very important qualities. He was a man of self-confidence, keen intellect, and the team ethic. He was also humble enough to listen to the man on the ground. He was accessible and kind. He abhorred arrogance and accepted constructive criticism. His brand of political activism shunned personal hatred, blind allegiance to party over country, or the cult of political idolatry. When asked what he wanted his legacy to be, he said: “to make Dominica a place where every man and woman possesses the tools to earn a decent living.”

His style of leadership and the value system he espoused should be elevated to the forefront of discussion and debate. His being made for a better Dominica; his service was not in vain. May we always remember him.

Be the first to comment on "REMEMBERING MIKE DOUGLAS" 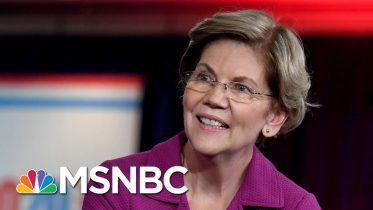 The panel discusses Sen. Warren's debate performance and her decision to go after former NYC Mayor Mike Bloomberg. Aired on 02/26/20. » Subscribe to…

Trump And Ukraine: How Did We Get Here? | On Assignment with Richard Engel | MSNBC