Is Dictatorship Engulfing My Country, Dominica?

At a first glance of the aforementioned statement, one can (but not dismiss) a sense of uncertainty and concern worthy of discussion. The question we need to confront ourselves with is; are we capable of discussing the pro’s and con’s, with an un-blinded/biased objectivity, whilst maintaining a degree of civility when we differ?
Do date, the detractors within cannot, and will not engage in a civilized discussion, because of the archaic and primitive modus operandi they continue to employ; “Hell no, we will not go”, and ‘somehow’ have managed to preserve this pervasive ideology with this continuation of speaking ill, and continued belittling of those who are being suggestive by discussion, otherwise. The more I reflect is the more I am disgusted by the silent ones within this forum; their continued perpetuation of this vile and undemocratic practise! Yes your collective silence perpetuates this vile and ignoramus operandi!
Kinda like endorsing a jackass to represent you without the concern of being discredited when the braying becomes idiotic. What did you expect?
Now that I have got my little idiotic rant out of the way, let’s focus on the caption above. In order to ascertain an honest understanding of the ‘caption’ posed above, we must first explore an understanding of the guiding criterion;

Other within this elite audience, continue to stress the omnipotence of the Prime Minister (with his consequent suspension of rights). Really, when did this happen? Is that not what Dictators do? And somehow, as the key element of his dictatorship, will argue that such concentration of power can be legitimate or not depending on the circumstances, objectives and methods employed.
Well so far to date, The Prime Minister has not exercised this right (as allowable by the founding principles of the dictatorship doctrines); clearly indicating to me the freedom of movement, congregation, and the right to openly disagree (as clearly defined on this forum), is very much alive.
I think I like this new Dictatorship; a startling contrast to the intended meaning of past interpretations; would you not agree?

So in conclusion, ” Is Dictatorship Engulfing My Country, Dominica?” I think not! I am more susceptible to believe that “fear mongering is engulfing my Country, Dominica”!
Could I be wrong? Absolutely! Am I wrong? Well, I have yet to be privy to any information I deem ideal enough in qualification of that reality! Circumstantial is not considered as qualification in the real world. I think a reality check is in order for those of you who are being suggestive, and continue to parade it, by suggestion.
My humble opinion.
CV

Be the first to comment on "RE: Is Dictatorship Engulfing My Country, Dominica?" 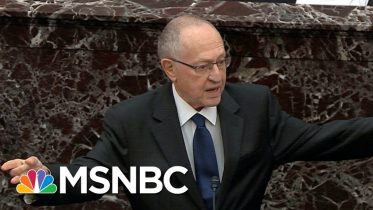 Dershowitz: Anything Trump Did To Win Re-Election Is In The Public Interest – Day That Was | MSNBC

On the first day of Q&A at the Senate impeachment hearing, Trump attorney Alan Dershowitz argued that a quid pro quo arrangement that benefits…

Trump used this word 17 times when talking about background checks

Bloomberg Camp. Mgr On Biden Rise: It’s Dramatic & Real, But Primary Is Not Over | Deadline | MSNBC