Michael Astaphan, wrote Hi Chris, The only democratic government ever to pass Integrity in Public Office legislation without any Right to Information and Whistle Blowing Protection Legislation is this DLP led administration in our beloved Dominica. On top of all that, it took them 5 years to effect the legislation. When a Government does that, all they have done is to expose their dishonest and corrupt identity to the World. I have told you so in so many way and yet still you talk about this in your conclusion  “It is also of an equal importance that this diligence is monitored and reported as an unbiased and non-political agenda if authenticity is to prevail”. The facts were steering us all in the face and yet some Dominicans participated and supported this corrupt regime financially and otherwise, others were on the radio and Internet (you in particular) promoting the monster regime and the rest knew the facts and sat silently and allowed the criminal regime to continue to represent them. Those Dominicans that exposed the truth were labelled as Political Opponents that would say anything to oppose the leadership of the DLP with propaganda. The facts are the facts. Tell me, are we serious about a MOU with China? Is it a MOU with a China we know??? Which China?? The Red Army China ??? or The Corporate China??? or The Chinese Mafia China???? Which one did we sign the MOU with?? We do not know yet we support this nonsense and talk about non-political agenda!!! We need to be honest with ourselves because unless we are, we will forever be pontificate on having to be unbiased not realizing that there is nothing more bias than not being honest with the facts and ourselves. We are all responsible in one way or another for Dominica as it is today and we must take the responsibility to address the deteriorating situation our children’s sake. God Bless 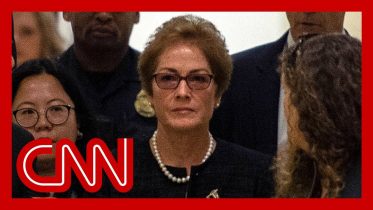 The former US ambassador to Ukraine, Marie Yovanovitch, testified behind closed doors Friday as part of the Democratic-run impeachment inquiry, giving critical information about…

Brooke Baldwin reacts to Trump video: How could I not take it personally?