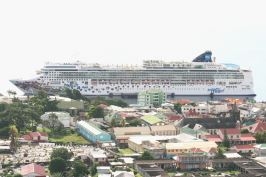 the MV Norwegian Gem, which made its inaugural call to the Roseau Cruise Ship Berth in Roseau last Saturday, went on organised tours to several of Dominica’s unique attractions.

This was the eleventh inaugural call for the 2007/2008 cruise season.

The Norwegian Gem, which is owned by MV Norwegian Cruise Line, will make one more call to Dominica in the 2007/2008 cruise ship season. The passenger capacity of the 294. 13 liner is 2384.

A brief ceremony aboard the Ship was attended by Permanent Secretary in the Ministry of Tourism, Mrs. Esther Thomas, Chief Executive Officer/Director of Tourism, Mr. Steve Bornn, General Manager of the Dominica Air and Sea Ports Authority, Mr. Benoit Bardouille and officials from the  Discover Dominica Authority. 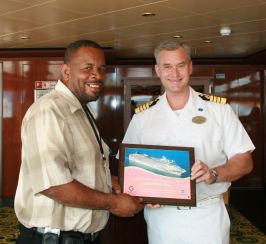 Remarks were also delivered by the Ship’s Captain and a representative from H.H.V Whitchurch, the Ship’s Agent.

Cruise tourism is a major component of Dominica’s growing tourism sector. Under the Eco-Tourism Development Programme(ETDP) the Government of Dominica with the assistance of the European Union,  has invested heavily in the improvement and restoration of a number of eco-tourism sites, popular areas of interest for  stay-over and cruise passengers. (Ends)

ST GEORGE’S, Grenada — Grenadian lawyer and former senator Arley Gill is expected to leave the country shortly to work in Dominica. A report on…

Oversight Cmte. Member: ‘If You Have Evidence Of Wrongdoing, Come Forward’ | The Last Word | MSNBC