Kingston, Jamaica. January 25, 2013 – Jamaica, Haiti and the Dominican Republic are among the 11 islands to benefit from a new project intended to promote civil society participation in biodiversity conservation across the Caribbean.

The project – titled “Strengthening the Engagement of Caribbean Civil Society Biodiversity Conservation Through Local and Regional Networking and Effective Sharing of Learning and Best Practices” – is being funded to the tune of $152,000 by the Caribbean Ecosystem Partnership Fund (CEPF).

Implementation is being undertaken by Panos Caribbean, which was incorporated in Washington DC in 1986. The institute moved its main office in 1997 to Port-au-Prince, Haiti though it continues to maintain offices in Washington and has had a locally registered office in Jamaica since 2005.

“Ultimately, the aim of the project is to strengthen a regional community of actors involved in conservation that are keen and able to share information and experience, and that have the capacity to use communications as a vehicle for participatory policy formulation and local action,” said Indi Mclymont-Lafayette, Country Co-ordinator with Panos (Jamaica office).

Meanwhile, in addition to Jamaica, Haiti and the Dominican Republic, other islands slated to benefit include Antigua and Barbuda, the Bahamas, Barbados, Dominica, Grenada, St Kitts and Nevis, St Lucia, as well as St Vincent and the Grenadines.

The project, which is to come fully on stream in January, has as its focus:

According to comprehensive research done by the Critical Eco-system Profile in 2010, The Caribbean Islands Hotspot is one of the world’s greatest centers of biodiversity and has key species only found in the region, yet its biodiversity and the natural services it provides are highly threatened.

“Many of these sites provide habitat for important marine species. For instance, 18 key biodiversity areas harbor the highest densities of sea turtle nesting sites in the hotspot, with more than 100 crawls annually by globally threatened sea turtle species,” the document said. “Mangroves are a critical feature in a number of key biodiversity areas and all support exceptionally high numbers of globally threatened species. The corridors encompass groupings of these key biodiversity areas of high priority due to their importance for maintaining ecosystem resilience, ecosystem services values, and the health and richness of the hotspot’s biological diversity.” (END25/01/13) 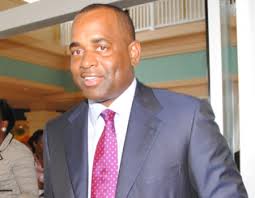 Schmidt: Trump Has ‘Made Himself America’s Greatest Victim’ | MSNBC

Roosevelt Skerrit, prime minister of the Commonwealth of Dominica and leader of the Dominica Labor Party, lauded closer ties with China