A grand jury has indicted a former South Carolina police officer in the April shooting of an unarmed black man, the prosecutor announced on Monday.

Former North Charleston Police Officer Michael Slager, 33, has been charged with murder in the death of Walter Scott, 50.

“I think the people of the 9th circuit elected me to be accountable to them, and that’s what we intend to do,” Charleston County Solicitor Scarlett Wilson said during a news conference following the announcement of the indictment Monday. “They have to know they have someone prosecuting the case who is accountable to them.”

“We’re going to patiently wait for the criminal trial in this case,” Chris Stewart, one of the attorneys for the Scott family, said in a brief press conference. “It’s just about keeping the faith. The community has done that. The family has done that, and we’re going to continue to do that until the resolution of the criminal and the civil case.”

Stewart thanked the community and noted the family plans to file a civil suit in the next few months.

“It is our belief that Officer Slager, with his history — as you have known — should have been reprimanded … before the entire situation with Mr. Scott,” Stewart added. “Right now we’re just digging and gaining more information.”

“This morning, the grand jury made the decision to indict Mr. Slager for murder, and we’re very pleased and happy about that,” he said.

Feidin Santana, a witness who recorded video of the incident, told NBC News he was walking to work when he saw police chasing Scott.

Slager was fired from the police department in April. At the time, North Charleston Police Chief Eddie Driggers said he was “sickened” while watching video of the shooting taken by a witness.

Be the first to comment on "Michael Slager, Cop Who Fatally Shot Walter Scott, Indicted For Murder" 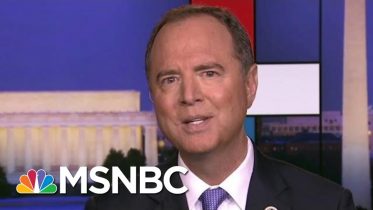 Rep. Adam Schiff, chair of the House Intelligence Committee, talks with Rachel Maddow about his fight with the ODNI and the DOJ to get…

Trump: We must condemn white supremacy