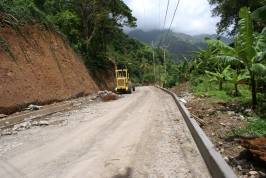 Roseau, Dominica – May 5, 2009……………… In the midst of an unprecedented global economic and financial crisis manifested by record fiscal deficits, huge government debt, mass unemployment and economic contraction in the major developed countries, the Labour Party Government of Prime Minister, Hon. Roosevelt Skerrit can still point to a number of significant achievements as it observes the 4th Anniversary since its May 5, 2005 General Election victory.

In the last twelve months the Government can point to achievements in the areas of fiscal management, infrastructural development, geothermal energy development, agriculture and fisheries, tourism and human resource development.

The achievements in the last twelve months include:

2.      Work is progressing well on the Soufriere-Scotts Head Sea Defences and Roadworks project Phase II at a cost of $16 million ECD financed by the Government of Venezuela;

3.      Work is progressing satisfactorily on the Roseau Road Reinstatement Project. Contract sum is $20.6 million. The bridge is expected to be completed within weeks;

4.      Works are advanced on the Road Improvement and Maintenance Project. Contract sum is $22.9 million ECD;

5.      Government signed the contract for Phase II of the TaneTane Sea Defences and Roadworks project at a cost of $1.5 million. Phase One was completed last year at a cost of $3 million;

7.      Rehabilitation of Federation Drive in Goodwill was completed at a cost of $1 million;

8.      Government secured a soft loan of US$9.16 million for the Point Michel Sea Defences and Roadworks project;

9.      Work was completed on the road from the Blenheim Junction to the new Thibaud Bridge at a cost of over $ 3million. Work has started on the section from Gomier to Au Parc;

10. Work is advanced on the first phase of Canefield-Melville Hall Road. Contract sum for this phase is $29 million;

12. Work was completed in the last year on the Warner/ Sultan Road at a cost of $3 million;

13. Work on the final designs of the West Coast Road continued in the last twelve months. Actual construction is expected to begin later this year;

14. Signing of Exchange of Notes and Grant Agreement for Portsmouth Fisheries Centre. Contract sum is $US7.5 million;

15. Work on the Air Access Improvement Programme accelerated in the last 12 months with work expected to be completed before the end of the year. Total cost EC$109 million;

16. Work is almost 100% complete on thirty houses now under construction at Hillsborough Gardens in St. Joseph;

17. Work is advanced on the construction of forty-one(41) houses in the Carib Territory;

18. Work is almost 100% complete on the eleven houses at Bellevue Chopin;

19. Under the Home Repair and Sanitation component of the Housing Revolution programme  556  houses have been repaired at a cost of $2.8 million;

20. Thirteen houses have been completed in Chance in Portsmouth in the last few months;

25. Implementation of the Waitukubili National Trail continued with trail construction, sensitisation meetings and training activities. Project is being implemented jointly by the Ministry of Agriculture, Fisheries and Forestry in partnership with the Regional Council of Martinique;

26. New Small Business Support Unit in the Ministry of Trade has provided zero interest loans to a number of individuals in support of various economic activities;

27. Formulation of a National Export Strategy now underway in Dominica;

30. Work on the new Administrative Block at the Portsmouth Secondary School is progressing well;

31. Phase II of the Dominica Grammar School was completed in the last twelve months;

32. Sixteen young Dominicans left Dominica for China in August to pursue university degrees in a variety of fields, taking the number of Dominicans studying in China to 70;

34. In the area of geothermal energy development, it has been established that we do have geothermal resource in significant quantity in the Wotten Waven area. Work has started on the formulation of a National Energy Policy and Sustainable Energy Plan for Dominica;

37. Reform at the Customs and Excise Division is ongoing with the introduction of a modern computerised system- ASYCUDA World;

39. Agricultural Investment Unit in the Ministry of Agriculture  established in the last twelve months;

42. The Ministry of Agriculture completed the introduction of the Agricultural Information Management System (AIMS). $900,000 was spent on the programme;

43. New  fully equipped Patrol vessel  for the Coast Guard  valued in excess of  US$728,000 was received earlier this year;

44. In an effort to deal with the nursing shortage, Government continued to  provide  financial assistance to persons doing nursing programmes at various levels in Dominica, through the  Cuban government-supported/Dominica State College programme, UWI (Trinidad)  and online;

45. Exemption from all hospital user fees for  persons 65 years and older and persons 18 years and under;

46. In collaboration with the Cuban Government, the Miracle eye care programme continued to benefit many Dominicans;

47. The ICT Development Programme funded by the European Commission at a cost of $17 million continued to impact positively on the population.  Hundreds of persons have received training through several ICT training programmes. Fifty-four (54) teachers have been certified and now have the International Computers Driving Licence (ICDL). 487 new computers were distributed to all secondary schools and five primary schools. Work continues on the formulation of a National ICT Policy for Dominica and the review of legislation governing ICT. There was also a  very successful ICT Fest in March 2009;

48. A number of communities, most notably Petite Soufriere, Boetica, Carib Territory and Woodfordhill continued to benefit from resources from the Dominica Social Investment Fund. Many communities also benefited from resources under the Basic Needs Trust Fund.

50. Dominica hosted a highly successful Reunion 2008 when thousands of Dominicans returned home on the occasion of the country’s 30th Anniversary of Independence. Reunion 2008 was a collaborative effort between the Government of Dominica, the Reunion 2008 Committee, private sector organisations in Dominica and Dominicans living overseas.

As the Government looks forward to the next twelve months, the Roosevelt Skerrit administration is cautiously optimistic that the heightened implementation of its Public Sector Investment Programme, increased private sector activity coupled with its adherence to responsible fiscal and economic management, that Dominica can stave off the worst from the current global financial and economic crisis.

Be the first to comment on "LABOUR IN POWER: FOURTH ANNIVERSARY SINCE MAY 5, 2005 GENERAL ELECTION" 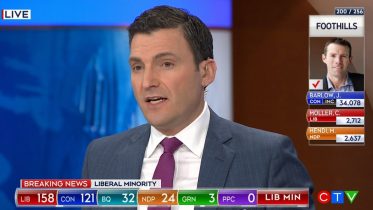 Solomon: Why the 2019 election has been a win for Singh despite seat losses

Evan Solomon breaks down why it will still be a victory for NDP Leader Jagmeet Singh despite seat losses. #cdnpoli #elxn43 Subscribe to CTV…

Bernie Sanders: Iowa was an embarrassment