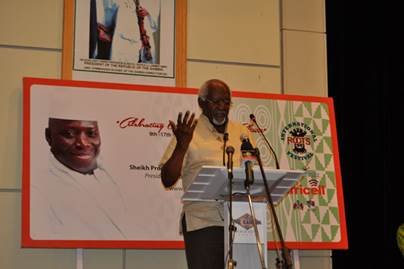 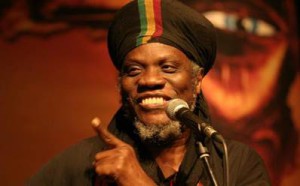 Mutabaruka, Roots Festival Cultural Griot, told IRIE Music News, May 22, 2014, that he was locked in a meeting with government officials in discussions regarding the abolition of visa requirements for Jamaicans.

Mutabaruka, world renowned dubbed poet who is currently in the Gambia as guest of the Ministry of Tourism & Culture and President of the Republic, Sheikh Professor Dr Yahya Jammeh. Baruka said that he has received citizenship of The Gambia.

The IRIE FM News report, said Muta was a part of a team who met with Gambian officials (Vice President of The Gambia and Minister of Tourism & Culture) regarding African Diaspora issues including visa requirements.

The staging of the Gambia Roots Homecoming Symposium 2014 held at the Kairaba Hotel, Serrekunda, The Gambia is captured in part by the enclosed photographs. The Symposium was staged under the theme: Unity Through Culture. Keynote speakers were: Dr. Julius Garvey, Jr. Pan Africanist, USA); Prof Runoko Rashidi (Historian & Lecturer, USA) and Professor Lamin Saar, Historian, University of The Gambia.

Dr Julius Garvey, Jr. spoke of thought, traditional ways of living and how we understand the world, he called it ‘Culture’. He said the essence of the values which are embodied in Ubuntu, a principle of humanity that Africa gave to the world, which states: ‘I am what I am because of who we all are’, should be the currency of our exchange with Africa and the world. www.ubuntu.com

He stressed that African should be living the Ma’at principles created by Africans during its Renaissance, moving away from the culture of domination forced on Africans in the new world through a system of mis-education put in place to capture the hearts of those already captured.

Selected Rebuttal Speakers: Mutabaruka, Festival Cultural Griot and Sizzla Kalonji, Festival Music Ambassador and Olimatta Taal, Festival Publicist & Promoter and others. Mutabaruka called for the removal of a Visa for travel by the Diaspora to The Gambia.

Mutabaruka spoke on culture and multi-cultural diversity. He gave an example of one African country speaking 200 different languages and various rituals used in Africa. He said that as a people we need to re-define and re-examine our African Culture. As Dr Julius Garvey pointed out in his speech, culture is the basis of all other disciplines, in fact, religion came out of culture and not the opposite. He went on to say culture is part of Cultural Revolution not just dancing and singing, we cannot dance and sing our way out of our problem. Consideration of Archeology, Sociology, History is a practical way to work towards change, he opined.

Sizzla called for Pan-Africans to move forward progressively, united in heritage and culture economically and socially to advance the welfare of our people. The spiritual leader of the Nyabinghi order in Jamaica, said people in the ‘Livespora’ need to come to Africa, open doors not just to repatriation. He asked what are the plans of the Pan African leaders for the development and progression of our people living in and coming to Africa? Kalonji said he represented the Black International Repatriation movement and he represents all the people of the world. He charged the leaders of the new African Renaissance to build new cities, reservoirs and universities, etc., so that we can take our children out of the McDonalds and Burger Kings of the world.

Kalonji has been invited to the Africa Union Conference now in session in Ethiopia and no doubt will be bringing some of the same issues raised at the Symposium. He indicated to me in an earlier interview while I was on assignment in The Gambia that he would include in his presentation a call for increased attention on pre-natal and post-natal care of African women to increase live births, increased education for women and also protection of women in cultures around the world. As a strong voice for the vulnerable in society, Kalonji’s promise is a good forecast for real change on the continent.

According to the Africa Union website, from May 20th to the 25th, the AU will bring together Africa’s top creative minds in Addis Ababa, Ethiopia under the theme – Africa Re-imagined Developing the Identity, Heritage, Arts and Culture Agenda. There will be 100 writers, poets, musicians, painters, sculptors, architects, film makers and intellectuals from around the continent, as well as, the diaspora for discussions to inform its foundation chapter on ‘’Arts, Culture and Heritage” for the African Union’s 2063 Agenda. The release stated “luminaries, noted below, will guide and facilitate the debates, which include: Ben Okri, Pitika Ntuli and Wangui wa Goro. Some of the prominent artists include Yasiin Bey (the US born artist formerly known as MosDef), Juwon Ogungbe, Mamadou Diabaté, Sizzla Kalonji, and Ray Phiri.” AUC Chairperson Dr Nkosazana Dlamini Zuma says; “Arts and culture are the soul and the spirit of Africa and her people. Without the voices of our creative minds, the 2063 Agenda would be sadly diminished.” The conference thus aims to find a bridge between artistic and intellectual minds and political office holders. www.au.int

Olimatta Taal, International Publicist for Sizzler Kalonji and Festival promoter, was responsible for bringing the spiritual leader, his band, Mutabaruka, Sharon Parris-Chambers (Publicist), Denise Isis Miller (Broadcast-Journalist) as part of the 18-member delegation from Jamaica to this year’s staging of the Gambia Roots Homecoming Festival. Indeed, she had the last word at the Symposium as the moderator indicated, after making her statement, the session came to a close. She called on the speakers not to leave the issues with the conference, but to lead the push towards a new Pan-Africanism and continue to help create the necessary changes to advance our race.

Be the first to comment on "Jamaicans MAY no longer require a visa to travel to The Gambia, West Africa" 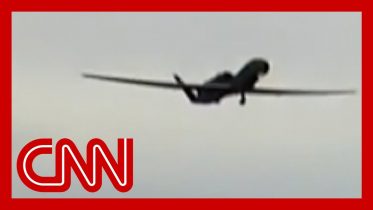 The Pentagon has released a video that they claim shows Iran shooting down a US drone. Iran's Revolutionary Guard said it had shot down…