“UPP trying to rig elections: they know they will lose otherwise”

Fellow Citizens and Residents of Antigua and Barbuda

The UPP is driving our country into a dictatorship.

They have no regard for the law, no respect for Judges; and nothing but contempt for the judicial system.

The UPP leaders know that the jig is up.

They know that their lies and deceit; their broken promises and false pledges have caught up with them.

That is why the illegal UPP regime is going to Parliament on May 27 to pass a wicked and unjust amendment to the Representation of the People’s Act.

Their intention is to try to re-register voters in every constituency, eliminating those people they believe are now against them and padding the lists with ghost voters and persons living overseas.

Their intention is to rig the list for by-elections or general elections for they know they will lose otherwise.

It is a serious and grave blow to our democratic system of governance that the UPP will pass this legislation in Parliament even though they have no mandate to do so.

It is an even more dastardly erosion of our democracy that they will pass this legislation while their status in the House of Representatives is under consideration by the Court of Appeal.

Even though Baldwin Spencer, Jacqui Quinn-Leandro and John Maginley have been granted a temporary stay of a High Court judge’s Order that their seats are void and should be vacated, they have no moral authority to pass laws.

They should properly absent themselves from Parliament until the Court of Appeal gives a decision on the appeal they have brought against the High Court’s ruling that bye-elections must be held in the constituencies in which they were not properly elected.

It will always be a shameful stain on our Parliament that legislation to rig elections was passed by ten representatives, three of whom have no moral right to cast a vote in the House of Representatives, and one of whom should not be a member of the government.

I promise you now that the Antigua and Barbuda Labour Party will not let this stand.

We will not let it stand not only because it is nothing more than the vilest abuse of Parliament for an iniquitous partisan political purpose, but also because it brings shame to our country and to our people as a whole that our democracy could be so vulgarly defiled.

It is to the credit of the Elections Commission that they are continuing to prepare for by-elections in the event that the Court of Appeal upholds the ruling of the High Court that Spencer, Quinn-Leandro and Maginley must vacate their seats.

That the remaining members of the Commission have shown such courage and dignity in the face of the UPP’s strenuous efforts to undermine them is a credit to their character and cause for pride in their sense of patriotism and their fearless independence in doing their job.

I remind you that the very electoral list that the UPP now so urgently and desperately wishes to change is the same lists under which they won the 2004 and 2009 general elections.

Why was nothing wrong with the list then, but everything is wrong with it now?

The answer is that the UPP realise that people have cast the scales from their eyes and they can see the UPP leaders for the bungling incompetents that they are.

Never before has our economy been so bad.

Never before has crime been so high.

Not since the regime of the PLM has unemployment reached 20%

Not since the regime of the PLM have we seen begging in the streets.

The reality is that our country is in dire crisis.

We are at a most critical juncture in our social and economic development.    The UPP’s has driven our nation into despair after six calamitous years of high taxes, huge debt, poor management and extreme waste.

Despite this disaster, Baldwin Spencer has spent another week squatting in the office of the Prime Minister.

Other squatters are John Maginley and Jacqui Quinn-Leandro.

None of them have any right to be in the House of Representatives, let alone to exercise power as members of the government.

They are squatters – people occupying places in which they don’t belong.

And, the entire world knows it.

The correct composition of the House right now is:

And, what is more the desperate UPP leaders know it.

That is why they are struggling to appear united, even while, behind the scenes, there are bitter fights and deep suspicion.  More than one is anxious for alternative leadership and many are jockeying for positions.

It has made the maximum leaders very jittery and they have decided to stop at nothing to maintain themselves in power.

My friends, you will recall that from March 2009, when I returned to the House of Representatives, I have been raising continuously with the Speaker that Trevor Walker was elected to the House as the candidate of the Barbuda People’s Movement and, under our Nation’s Constitution, he has no right to be sitting in Parliament with the UPP or, indeed, to be a member of the UPP government.

This is yet another illegality by the UPP regime which has resorted to legal thuggery and downright flouting of the law to maintain itself in office.

In conspiring with the UPP to contravene the law, Trevor Walker has left both the Barbuda Peoples Movement and the people of Barbuda without a voice in the House of Representatives.

He is no longer serving the BPM and the Barbuda people; he is serving the UPP and himself.

All of the people of Barbuda are now disenfranchised.

The Labour Party proposes to raise this matter with the Speaker again.  We expect that she will do nothing since she is part of the structure of illegality that the UPP has established to maintain itself in office.

But, this week the Labour Party wrote to the General Secretary of the BPM about this matter.

I feel it is right that I should reveal the contents of the letter to you in full.

The letter reads as follows:

As you are aware Section 41 of the Constitution of Antigua and Barbuda states:

Every member of the House shall vacate his, seat in the House-

e.       if, having been elected to the House by virtue of being a member of a political party, he resigns his party whip and withdraws his allegiance from that party:

Provided that he shall not be required to vacate his seat so long as he remains an independent member of the House.

To our knowledge and certainty, Trevor Walker was elected to the House of Representatives in the March 2009 general elections as a member of the Barbuda Peoples Movement (BPM), and he has not resigned from the said political party nor has he withdrawn his allegiance from it.

In these circumstances Mr Walker should not and cannot be a member of the government of Antigua and Barbuda.

Further, if Mr Walker has resigned his party whip from the BPM and has withdrawn his allegiance from the party, then the BPM is not represented in the House and Mr Walker should properly remain in the House only as an independent member.

On all counts, he should not be a member of the government.

We further conclude that he is not acting in the interest of the BPM and the people of Barbuda, and that you should be as concerned about this matter as we are.

In the premise, unless we receive particulars from you within seven days of delivery of this letter as to why we should not do so, we shall take such legal action as is necessary to ensure that the Constitution of Antigua and Barbuda and, in particular, Section 41 (e) is respected and upheld.

My friends, such is the arrogance of this UPP government – both those who squat in office; and those who no one elected – that they believe that they can tell the people of this country what they like, and behave how they like.

To them, the people are not important.

All that is important is their inflated egos, and usurping power.

But, we must fight to preserve our democracy that we built so painstakingly over many long and arduous decades.

The UPP must not continue to destroy it.

They control and muzzle the state-owned media; but they cannot stifle the people’s freedom to speak out against them in their living rooms, in shops, bars and supermarkets and at street corners.

They have manipulated the parliamentary system is the most vulgar way; but they cannot legislate against people’s desire to vote them out.

They have taken a prosperous economy with low taxes and the second highest per capital income in the Caribbean and pushed it to the very brink of disaster.

My friends, Look around you…  are you better off today?

$64 million squandered on fences while our schools are a disgrace.

$100 million squandered on an unfinished and decaying car park that is an eyesore in our capital city.

Another $100 million squandered on the most expensive 10 miles of road ever built in the history of mankind.

$1 billion raised in taxes from the backs of our people.

$2 billion borrowed money that the country has to repay,

And nothing to show for it but the unfinished car park, and a few roads.

All that money squandered and crime rises every day; gangs roam the schoolyard and no one in safe at night.

All that money and mothers can’t buy food and medicines.

All that money and workers aren’t being paid on time and our unemployment rate is a staggering 20%.

This UPP sunshine was nothing but a false dawn.

Darkness and shadows are what they have brought us.

But, better is coming.

By general election or by-elections, together we will cast them and their arrogance out.

My friends, we are ready to rescue our nation.

We are ready to end the catastrophe that is the UPP.

But, we all have to be vigilant and to act together to stop their abuse and excesses.

We will continue to use every legal means to halt their continued destruction of our country, and their attempts to keep themselves in office by skulduggery.

I end as I began this week. Be warned.  The UPP intends to rig the electoral list.  They realise that you want to see the back of them.  They plan to rig it.

Together, we must stop them.

Let us join together to see the back of them.

I thank you once again for listening, and I pray God’s blessings on us all.

Be the first to comment on "Hon. Lester Bird Sunday Broadcast for May 23rd, 2010" 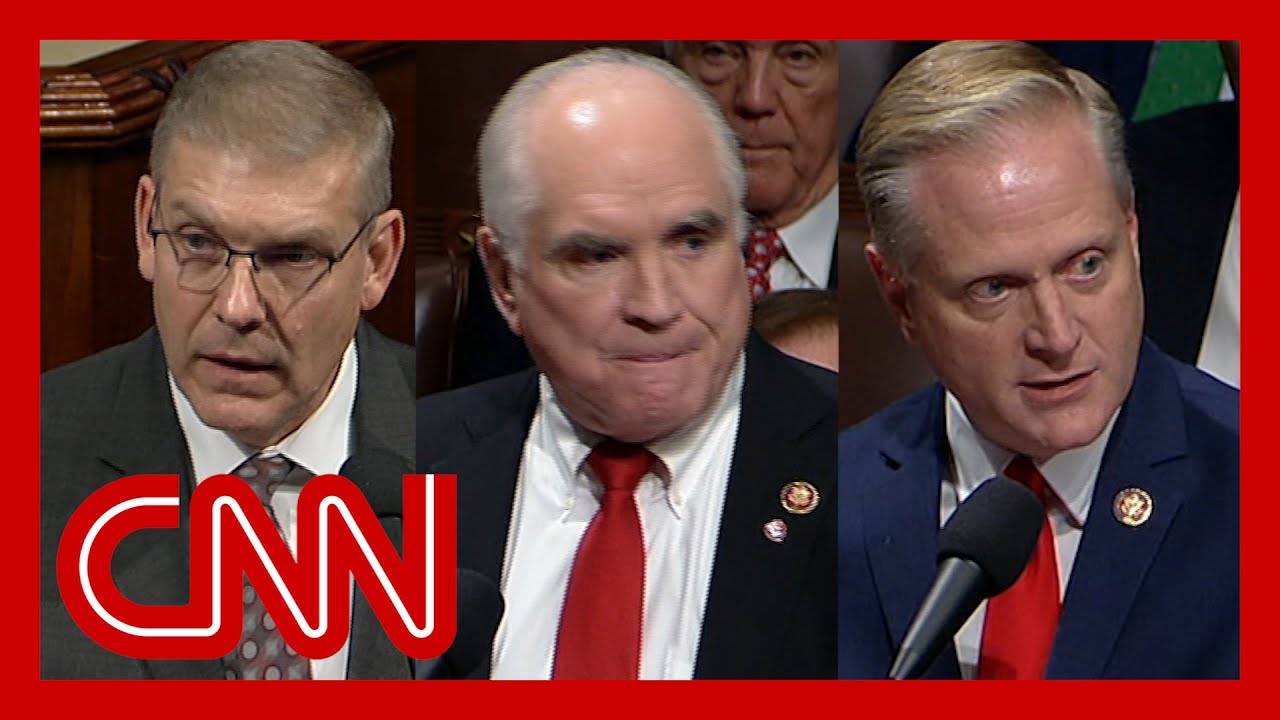 Where Will Impeachment Inquiry Go? Check History | All In | MSNBC