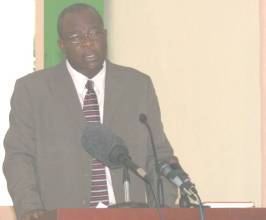 HON. JOHN FABIEN REFLECTS ON THE CONTRIBUTION OF THE

LATE PRIME MINISTER ON THE OCCASION OF THE

Roseau, Dominica – July 15, 2009…….On the occasion of the annual Pierre  Charles Memorial Day, celebrated on Friday, July 3rd 2009,  Parliamentary Representative for the Grand Bay constituency and Minister for Health, Hon. John Fabien, reflected on the  enormous contribution of the late Prime Minister to Grand Bay and Dominica as a whole.

Speaking after a mass at the Grand Bay Roman Catholic Church, Hon. Fabien spoke about the significant contribution of the late Hon. Pierre Charles in the spheres of national development, community development, education, politics, sport, and the church.

Hon. John Fabien, who became the Parliamentary Representative for the Grand Bay constituency following the death of Pierre Charles in 2004, recalled the role played by  the late Prime Minister in times of difficulties and  natural disasters.

He recalled when Pierre Charles and a group of young men from Grand Bay came to the rescue of vulnerable persons when 150 mile per hour winds and torrential rain pounded Dominica for more than six hours on August 29, 1979 during Hurricane David.

Hon. Fabien also reflected on  the deep commitment of Pierre Charles to Grand Bay and how he persevered relentlessly in his quest to improve the lives of the people of Grand Bay, but he lamented that now, today, “sadly , I don’t think we have that kind of lasting power within us, we give up very easily ”.

The Health Minister advised the young people of Grand Bay that if they wanted to honour the late Pierre Charles, they should promote the values he espoused while he was alive.

“ I say to you  if you want to honour the life of this great man, please try to make a difference in the life of the community and within your own life, try to educate yourself, try to do things that can uplift the community,  and to you the parents- try to instil values in your children that will have a long lasting impression on them because that’s what Pierre Charles stood for.”

The Minister also suggested ideas on how the Pierre Charles Memorial Day could be celebrated next year and the years to follow: “ I want to say that  for every child who lives in this community, we would like to see  that on this day, they would go out in the community and help the elderly, help in the homes,  visit the shut-ins, visit the farms, do something positive in the community, because I think if we do that, we will be really honouring and saluting the life of this great gentleman, the life of this great person called Pierre Charles.”

Hon. John Fabien, whose friendship with the late Pierre Charles endured for over thirty years spoke movingly of the man he described as his friend, colleague and mentor.

“ He was a simple and humble man, but a man who had a lot of depth, a lot of commitment, a lot of love, a lot of respect for this community and for the people of  this country. I want to say to you that one of the things that we could do in terms of honouring his legacy is for you to go out there and reach out to the less fortunate among us,” Hon. John Fabien stated.

Also present at the Memorial Mass were the President of Dominica, His Excellency, Dr. Nicholas Liverpool and Mrs. Liverpool, Acting Prime Minister, Hon. Rayburn Blackmoore, other members of Cabinet, members of the village council and students of the Pierre Charles Secondary School.

Following the conclusion of the Mass, there was a procession to the tomb of Pierre Charles. Wreaths were laid by the President, the Acting Prime Minister, the Parliamentary Representative for the Grand Bay constituency and Mrs. Justina Charles, the widow of the late Prime Minister.

Be the first to comment on "HON. JOHN FABIEN REFLECTS ON THE CONTRIBUTION OF THE LATE PRIME MINSTER AT PIERRE CHARLES MEMORIAL"

BRIDGETOWN, Barbados, Thursday April 28, 2011 – The Caribbean island of Dominica is fast becoming a living example of the way that China has strengthened…

‘Whoomp! There It Is… The President Has Confessed Publicly’ Says Ari Melber | Morning Joe | MSNBC