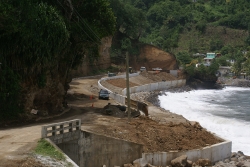 Roseau, Dominica – February 3, 2010……….. The Government of Prime Minister, Hon. Roosevelt Skerrit invested significant sums in critical areas of the economy in the first and second quarters of the 2009/2010 fiscal year.

This information is contained in the Schedule of Supplementary Appropriation for the First and Second Quarters of 2009/2010. When Parliament meets on Thursday, February 4, 2010, Prime Minister and Minister for Finance, Foreign Affairs and Information Technology, Hon. Roosevelt Skerrit will present the Supplementary Appropriation (2009/2010) Act 2010 to Parliament for its approval.

The legal authority for the Supplementary Estimates can be found in Section 80 (1) of the Commonwealth of Dominica Constitution Order 1978, as well as in Section 12 of the Finance Administration Act, Act No4/94.

The amounts appropriated were utilized to meet critical and unforeseen expenditure during the first and second quarters of the 2009/2010 fiscal year.

During the period, July-December 2009, the Government spent approximately $5 million to meet additional commitments for the national house renovation and sanitation programme.

Through the Ministry of Trade, an additional $1,730,000.00 went towards the Small Business Enterprise Development Programme through which a significant number of persons got financial assistance to aid their business enterprises.

Through the Ministry of Public Works and Infrastructural Development, over $5.7 million was expended on a number of infrastructural works island-wide. Projects completed in that period include the Fond St. Jean Sea Defence project, Pichelin By-Pass, Vieille Case Road rehabilitation and the Petite-Soufriere to Rosalie Link Road. The sum of $4 million was spent on road maintenance.

$7,957,858.61 was used for the financing of water projects in Warner, Campbell and Delices. $229,506.50 was spent to meet Government’s counterpart contribution for the Carib Territory Water Supply project.

In the period Government, through the Ministry of Agriculture, spent $2 million to effect the operationalization of the Direct Farm Investment Fund Facility. An amount of $469,698.00 was used to assist the Dominica Banana Producers Limited (DBPL) with 40 percent of the cost of importation of fertilizer.

ST JOHN’S, Antigua — During the sitting of the House of Representatives in Antigua and Barbuda last Wednesday, Prime Minister Baldwin Spencer announced the opening…

Elizabeth Warren: Where Trump is right now is a nightmare