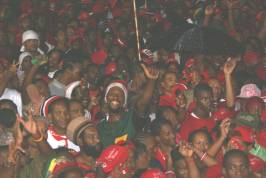 “To ensure the continued economic development of Dominica, you must vote D.L.P,” says Hon. Julius Timothy.

Roseau, Dominica – December 17, 2009……In the  last major activity organised by the governing Dominica Labour Party  before the Friday, December 18th 2009 General Election, Minister for Economic Development and Urban Renewal, Hon. Julius Timothy issued a warning to Dominicans that a vote for the U.W.P  would jeopardise millions of dollars worth of capital projects in Dominica.

Hon. Julius Timothy, who is the Dominica Labour Party’s candidate for the Roseau North constituency issued the ominous warning in front of a record crowd of well over 10,000 at the Windsor Park Stadium in Roseau last night.

According to Hon. Timothy, “to ensure the continued economic  development of Dominica, you must vote the Dominica Labour Party”.

The Minister added that the election of a United Workers Party Government would put a number of projects, funded by Venezuela and China on hold. These include the West Coast Road project to be funded by the People’s Republic of China at a cost of $110 million ECD. The Chinese Government has also granted the Dominica a soft loan of US$40 million to fund a number of projects in Roseau and the construction of a new Dominica State College.

Hon. Timothy added unlike the Dominica Labour Party Government, the leadership of the United Workers has not espoused its commitment to the one-China policy, putting in jeopardy the future relationship between Dominica and China if the UWP were to form the next government. 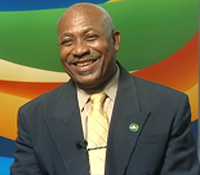 Former Cabinet Secretary Felix Gregoire has been appointed as Dominica’s new Commissioner to the OECS. He also succeeds the late Ambassador Charles Maynard as Ambassador…

US election: Why Donald Trump met Nigel Farage before Theresa May