In my January 2009 publication titled As She Returns, I summarized remembrances of a conversation held with my Mother in and around 2001. That conversation concerned our visual condition in which she wanted to know the state of my sight given that I had ‘inherited’ glaucoma from her. She’d probe me often to hear me on the matter.

How is the eye? What’s the time?

“She was trying to determine whether I could still see. Too many times I could not tell her that my vision was being blurred or I was losing it peripherally. I did not want her to be worried about me but she insisted on asking. She wanted truth irrespective. At the very least she could whisper a prayer with direction. Telling her the truth would make her more comfortable and set her thinking within its maternally intuitive domains.

“Experience had taught that the weight of the subject changes with time. Truth hurts, damages, even destroys. It finally releases. And I speak here about talking with a parent.

“When I would finally tell her the state of my eyes she listened intently with her head bowed not sadly but in a mode that caught each word and directed each utterance to a place of answers. She obviously did not want me to express regret and lifted her head when in my half anger I noted that I did not ask for this. Small mind. I rambled for about fifteen minutes. She summarized the matter. She said forget about that gene thing …. Forget? This was at the heart of modern reasons for disease. How could I forget about the gene thing? Silence. There was a larger matter coming beyond frontiers of the gene thing” (As She Returns found at www.publishamerica.com).

One year after our conversation, I left Dominica for New York and within the next acquainted myself with the literature of the Glaucoma Research Foundation. After discussions with one of the Foundation’s representatives, I came away with the view that the dominant belief then was that the optic nerve once damaged could not be restored or regenerated. That was not my view. I gather that as a layman and nonscientist, I had been affected too profoundly by the Lazarus Effect – any dead thing could be risen!

Three matters would arise later. One came from cell biologist Bruce Lipton whom I discovered in 2008. The other two ‘emanated’ from the Glaucoma Research Foundation and Vanderbilt University in Tennessee.

I will not detail any description or analysis of eye conditions here. This is not my field. I will simply highlight a few sentences which drew my attention as a person embodying glaucoma. I will also cite the website that you can trace if you care.

In his article titled “Glaucoma And The Brain” Jeffrey L. Goldberg MD PhD is real cool and poignant. Dr. Goldberg caught my attention when he wrote seemingly conclusively that “ … the eye’s retina and optic nerve are a part of the brain: during early development, a small part of the brain pouches out and becomes the retina and optic nerve.” Ah-ha. So glaucoma in the eye is merely symptomatic. I am not an ophthalmologist and must quiet myself after years of finger-tingling and a bitter throat from tubing Pilocarpine, Timolol, Xalatan etcetera in my eyes. My Mother used to say, “pour it in the corner of the eye.” How religious.

Writes Dr. Goldberg, “ … the understanding that one key to glaucoma is in the connections within the retina and to the brain has led to exciting advances in research that may well lead to new potential treatments” http://www.glaucoma.org/glaucoma/glaucoma-and-the-brain.php

The Foundation’s personnel and administrators, not to mention its doctors and scientists are excited about this shift and flow from eye to brain as causal point.

At Vanderbilt University in Tennessee, David Calkins, Ph.D. and director of Research discovered that “the first sign of injury in glaucoma actually occurs in the brain.” Wow. A bit scary, don’t you think? Could I have fallen as a child? Did I suffer a major blow? Did my Mother fall or was she frightened by an island spirit?

The article continues. “Traditionally, glaucoma therapies have focused on lowering ocular pressure within the eye. But the recent PNAS study gives credence to taking a new direction of study focusing on neuronal activity in the middle of the brain where the optic nerve forms its first connections http://www.mc.vanderbilt.edu/news/releases.php?release=1582

I went to www.treeoflife.nu in Arizona in search of brain food. They sold zeolite too. One dive in the sea at Mero could do much good cleansing that vital sense.

Dr. Goldberg has ideas that are positive and promising. “Thus, in addition to treatments directed at lowering eye pressure, still the mainstay of glaucoma therapy, there may be opportunities to develop treatments directed at the retina and the brain. Some promising treatments that promote nerve health, called neurotrophic factors, could help at multiple places in the visual pathway. For example, neurotrophic factors such as ciliary neurotrophic factor (CNTF) may keep retinal ganglion cells from dying, a process called neuroprotection; they may increase axon regrowth down the optic nerve, called regeneration; and they may improve the support between the dying retinal ganglion cells and their surrounding cells in the retina and brain, called neuroenhancement.”

I love it when he writes about “regrowth” “regeneration” and “neuroenhancement.” Intriguingly, I would’ve thought “neuro” and “enhancement” to be two powerful signifiers, but see how he unites them as if to legitimize a single one, as if to introduce its unity and thus its normalization. Quiet here.

I mean the Glaucoma Research Foundation is at present discussing the use of marijuana in the treatment of glaucoma. ‘Legalize it,’ sang Peter Tosh, ‘and I will advertize it.’ Remember. You may google THC Suppositories. As far as I know, the patent is being suppressed!

Now for our final insert from winner of the Japanese Goya Award for his exceptional work in cell biology. Bruce Lipton PhD, argues that we’re not victims of our genes. At the top of his site, you’ll read something that may just escape your reflection It says “internationally recognized leader in bridging science and spirit.”

The major text, the one that launched his ‘epigenetics’ is titled “The Biology Of Belief.” However, it is the subtitle that really sets his work apart and guides my journey. It is “Unleashing The Power Of Consciousness, Matter And Miracles” (www.brucelipton.com). It’s a place to visit.

Could the belief I developed that as long as my Mother had it I had to have it, contribute to its triggering in my brain? Wow! I’m out of my depth here! Could it be that the tendency, the gene patterns existed, and required that I find the appropriate environment for it or them to be ignited? If all that happens here is an increase in intraocular pressure, well it’s understandable, but what about the brain part? This brain thing is fascinating and full of possibilities!

I end this writing and thinking experiment with words from As She Returns (2009). “My Mother was pushing me outside of the field of scientific consensus, over against a dominant paradigm. But I am sure she did not intend for me to be in argument over the matter, but she came to this radical conclusion, presenting it to me for consideration, if not intellectual engagement. Speak softly. If you’re going to consider this gene matter, practice” (www.publishamerica.com). 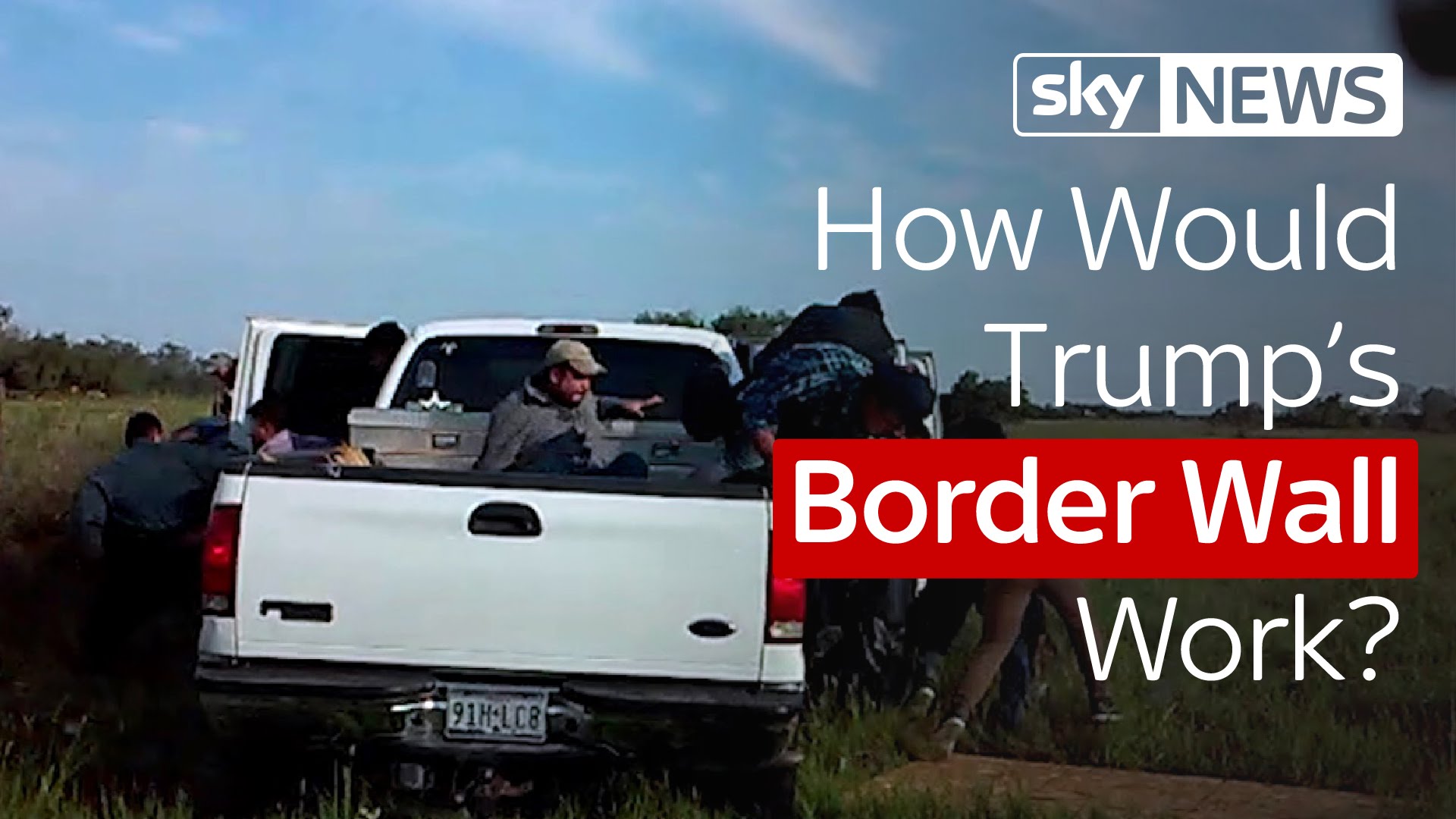 How Would Donald Trump’s Proposed Wall With Mexico Actually Work?

Donald Trump wants to build an "impenetrable, physical, tall, powerful and beautiful southern border wall" between the US and Mexico. Many of his supporters…