JUST SHY of his 38th birthday, Roosevelt Skerrit, the prime minister of the Common-wealth of Dominica is perhaps too young to have intimate knowledge of, or first-hand involvement in, the crafting of the regional integration movement and the conceptual frame within which the Caribbean Community (CARICOM) was established.

For instance, at the time of the signing of the Grand Anse Declaration that mooted the transformation of CARICOM to single market and economy, Mr Skerrit was still shy of his majority. He would hardly have been much older when, over two decades ago, the commission, headed by Sir Shridath Ramphal, provided a sharpened vision for CARICOM, including a reorganisation of its governance structure.

Against this background, we are perhaps not to be overly surprised, and forgive as maybe a foible of youth – but certainly not ignorance – Mr Skerrit’s complaint against those regional persons who lament that meetings, such as the present CARICOM summit in Montego Bay, tend to be merely talk shops.

It is that such people, Mr Skerrit suggests, just don’t get it. They are not of the privileged vantage point of leadership to understand why CARICOM heads of government make grand declarations which they then leave unfulfilled.

“It is the prerogative of some to fantasise about the good old days, but they have to accept that the landscape around us has changed dramatically,” said Mr Skerrit. In a way, Roosevelt Skerrit’s remark is symptomatic of the performance of CARICOM and reminds us of the adage that old men dream dreams, while young men have visions, upon which they act.

Except that Mr Skeritt is young enough and not burdened and atrophied by cynicism and is impatient with the crawling gait of the wary. It is he who should be at the forefront of and not only insistent on the logic of integration, but on the need to give practical effect to its reason.

There are many people in CARICOM who want to be optimistic about integration and may agree with Mr Skerrit that “going back is not an option”. However, very few would subscribe to an interminable dawdling along the way.

Indeed, as Mr Edwin Carrington reminded, there are many young people in the community – Mr Skerrit excepted – who are impatient with CARICOM’s failure not only to make a significant difference to their lives, but for failing to signal a prospect that it will.

A substantial part of the problem, of course, was identified ahead of this week’s summit by Dr Ralph Gonsalves, the prime minister of St Vincent and the Grenadines. “We have not been having serious leadership in CARICOM,” he said.

Or, put another way, CARICOM’s leaders have been singularly appalling in agreeing to a governance system that will allow the organisation to get serious things done. As Jamaica’s Bruce Golding put it on Sunday evening, CARICOM suffers from “implementation deficit”.

“Fixing it”, as Mr Golding is aware, demands ceding sovereign authority to a supranational centre or agreeing to an asymmetrical, multi-tracked community. Or, perhaps, the leaders have to agree that there is an incapacity to be serious and agree to go their individual ways.

We suggest, however, in times like these, when people are, according to Mr Skerrit, “in survival mode”, that cooperative action is critical – but not at a snail’s pace.

Be the first to comment on "EDITORIAL – Did CARICOM steal Mr Skerrit’s youth?" 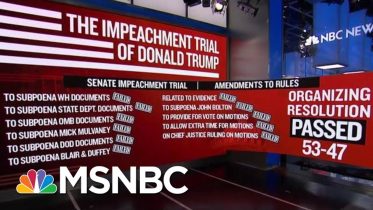 The Senate Adopted GOP Rules In The Impeachment Trial After Heated Debate. | MSNBC

The Senate adopted GOP rules in the impeachment trial after heated debate. Chuck Todd summarizes the night by saying, “At times it did seem…

Mitch McConnell: If House Impeaches Trump, Senate Has To Take It Up | Andrea Mitchell | MSNBC