ST JOHN’S, Antigua – Dominicans were on Monday expressing satisfaction with the arrest of four individuals held in the on-going murder investigation of 40-year-old Dorothy Prince who was shot and killed last week at the gas station where she worked.

Residents of neighbouring Dominica, the place where Prince was born, today called local talk shows to laud the Antiguan authorities for their quick action.

Carlisle Jno Baptiste, a journalist in Dominica, told The Daily OBSERVER that the news brought a sense of relief to family, friends and well-wishers back home.

“A number of persons called applauding the police for its swift work in getting at least four persons in custody and hopefully during the course of this week they expect these people to be charged,” Jno Baptiste said in a telephone interview from Dominica.

Jno Baptiste said, however, there is a level of disappointment that men linked to law enforcement are being implicated in the crime. He said he doesn’t expect the incident to sour the cordial relations between people of the two islands.

“So people called the radio talk show this morning applauding the police although they are extremely disappointed that a current and former law officer is implicated in the incident. Despite that people are expressing shock, dismay and are applauding the Antiguan authorities for the arrest of at least four persons in the matter.”

“I have not heard local authorities speak on the incident but I do not expect any negative implications in terms of friendship,” he added.

On Friday, police authorities confirmed that two members of the police force and two other men are being held in connection with the murder.

The men have been subsequently charged and will be taken before a magistrate. 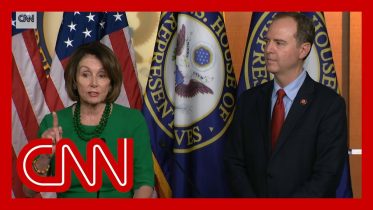 Pelosi and Schiff give update on impeachment inquiry

After a closed-door meeting with her caucus, House Speaker Nancy Pelosi is holding off on a full vote to authorize a formal impeachment inquiry.

Parents furious after getting a shockingly large PlayStation bill