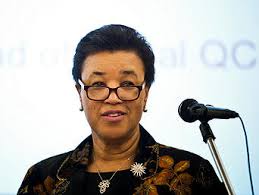 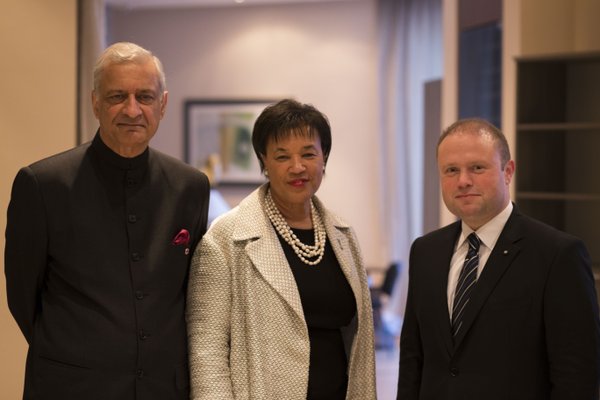 The Commonwealth of Nations on Friday elected Baroness Patricia Scotland of Dominica to its top post of secretary-general. She becomes the first woman ever to hold the post, which includes representing Commonwealth policy that affects the 33 percent of the world’s population that lives in Commonwealth countries.

Scotland beat Mmasekgoa Masire-Mwamba of Botswana in the vote held during the Commonwealth heads of state summit, comprised of 53 former colonies of the British Empire that still wish to be associated with the United Kingdom. She replaces India’s Kamalesh Sharma.
“I am incredibly proud to be the first woman to hold the post of secretary-general,” she said at a press conference after the election.

She pledged to put the “women’s agenda very strongly on the table,” highlighting domestic violence as a particular focus:

“Domestic violence affects one in three women globally,” she said two days after the International Day for the Elimination of Violence Against Women. “It is the greatest cause for morbidity in women and girls and it is a disgrace that this is so.”

Dominica News Online reports that Scotland was not the first choice for many of the Caribbean nations, who preffered Sir Ronald Sanders of Antigua and Barbuda. The matter was discussed at a recent Organization of Eastern Caribbean States leaders meeting, when Dominica reiterated its intention to nominate Scotland. Antigua and Barbuda later pulled out, allowing Scotland to be the Caribbean’s only entrant.

SPECIAL: The Malvinas Islands: A Colonial Enclave in Latin America

Scotland, born in Dominica in 1955, is a lawyer by profession who has achieved many “firsts” in the United Kingdom, where she was raised. Former posts include attorney general for England and Wales and minister of state for crime under Tony Blair’s Labour government, from 2003-2007. She became the first Black woman to be appointed a “Queen’s Counsel,” or top-ranking lawyer and she received a life peerage becoming Baroness Scotland of Asthal in 1997.

While Scotland’s election is a step forward for women and the Caribbean, many view the Commonwealth as an outdated link to the colonial era. Above Baroness Scotland, Queen Elizabeth II is the head of the association whose largest member is Canada and most populous is India.

Membership of the Commonwealth is supposedly voluntary—“any member can withdraw at any time,” says their website—yet just three countries have completely severed ties with the body: the Republic of Ireland in 1949, Zimbabwe in 2003 and The Gambia in 2013. It was reported this year the Barbados Prime Minister Freundel Stuart is getting increasingly uncomfortable pledging allegiance to a ruler who has not visited the former colony in 26 years, and plans to leave the Commonwealth soon.

ANALYSIS: After 63 Years God Save Us All from Queen Elizabeth II

Ahead of the official forum was the Commonwealth People’s Forum, which took place from Nov. 23 to 26 in Malta. One of the biggest issues was rights for lesbian, gay, bisexual and transgender communities in Commonwealth countries, which campaigners say the leaders continuously shirk addressing.

Activist Peter Tatchell said “This is the 66th year that Commonwealth leaders have refused to allow LGBTI rights on their official agenda.”

He continued, “They won’t even discuss LGBTI equality, let alone support it. It is a total disgrace and a shameful failure to honor the human rights principles of the Commonwealth Charter and the Universal Declaration of Human Rights,” according to Pink News. 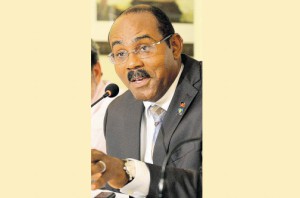 On Wednesday, the UK-based Daily Telegraph published a story implicating the diplomat in the IHI scandal unearthed by Canadian forensic accountant Robert Lindquist in a probe commissioned by the Baldwin Spencer Administration.

Browne is concerned that Wednesday’s article is an attempt to ruin the chances of Saunders — who is Antigua and Barbuda’s nominee to the post of Commonwealth secretary general — and embarrass the country.

“Clearly it is an effort to railroad Sir Ron,” Browne told the Caribbean Media Corporation on the eve of the Commonwealth Heads of Government meeting.

The article alleges that Sir Ron, who is currently Antigua & Barbuda’s Ambassador to the United States, received monthly payments of approximately US$15,000.

The director of public prosecutions and the police commissioner both absolved Sir Ron of wrongdoing, and he has always maintained his innocence.

“It’s no coincidence this article came out on the eve of the Commonwealth secretary-general elections. But I remain confident that Sir Ron is still in pole position, and we will redouble our efforts to make sure that he comes out victorious,” Browne said.

“It’s a planted thing in the Telegraph and this is an old story dating back a decade. In fact, Sir Ron was exonerated by the DPP (Director of Public Prosecutions) while serving in a UPP (United Progressive Party) government — it’s not a DPP serving in our government that exonerated Sir Ron. So as far as I’m concerned, that’s a dead issue that they are seeking to rehash to embarrass us, to sully his chances of emerging as the Commonwealth secretary general.”

Sir Ron’s nomination has been endorsed by several Caribbean countries. However, he faces competition from Dominica’s nominee Baroness Scotland — a former UK attorney general. The Roosevelt Skerrit administration has refused to withdraw their candidate, even in the face of overwhelming support for Sanders’ candidacy.

Queen Elizabeth II and heads of government from the 53-member grouping are descending on the Mediterranean island nation of Malta for the summit. 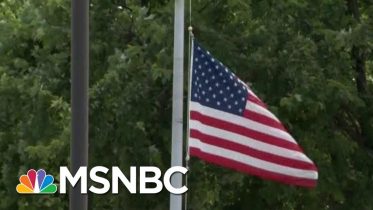