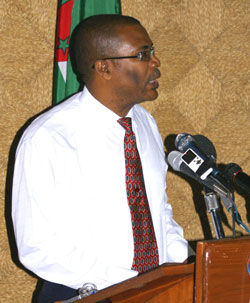 ROSEAU, Dominica, CMC – Prime Minister Roosvelt Skerrit has confirmed that his Health Minister Julius Timothy had been flown to the French island of Martinique for medical treatment after he collapsed at his office on Wednesday.

“Last night he complained about numbness in certain parts of his body,” Skerrit said on state-owned DBS radio, adding that “in due course a medical update on his progress will be given and we ask all Dominicans to pray for his well being”.

Media reports here said that Timothy, who was first taken to the Princess Margaret Hospital (PMH) on the outskirts of the capital, may have suffered a stroke.

Timothy, was a founding member of the main opposition United Workers Party (UWP), but crossed the floor to join Prime Minister Skerrit’s Dominica Labour Party (DLP) after the May 5, 2005 general election.

Timothy, 61, the former president of the Dominica Association of Industry and Commerce, entered parliament in 1995.

VECTOR CONTROL IS THE MAIN FOCUS OF THE ENVIRONMENTAL HEALTH UNIT

Three presidents speak out in one hour. Hear what they said.