St John’s, August 05, 2009 – The Antigua Labour Party condemns the multi-million dollar price tag on the UPP’s politically motivated Commission of Inquiry as a totally vulgar and hostile act of disrespect to the public interest.

While the UPP has sentenced the people of Antigua and Barbuda to suffer increased economic hardships dishonestly blamed on the global financial situation, Baldwin Spencer and Justin Simon have the unmitigated gall to squander over two million dollars on their name and shame election gimmick.

We are particularly concerned that even in its so-called agenda of transparency and accountability in governance, the UPP cannot manage to find the decency to tell the people what the IHI Commission of Inquiry will cost at this time of unbearable economic pressures.

Fortunately, a July 31st, 2009 article by Mark Pelley in the Australian – an affiliate of the Wall Street Journal – provides a good idea of how recklessly wicked this UPP government has become in its hate campaign against the ALP:

Spigelman will formally accept his role as sole commissioner in Antigua on Thursday — two days after the climax to the national carnival celebrations. One to two weeks of hearings will follow before he returns to Sydney.

It is expected the Chief will return to the capital of St John’s for a further two to three weeks of evidence before bunkering down to deliver his final report.

The NSW government was quick to point out this week that his Caribbean masters were “covering all costs, including his salary ($367,150), while he is away”.

“Whilst he obviously won’t be conducting his normal duties in NSW, there will be absolutely no cost whatsoever to the NSW taxpayer,” said a government flack. “He’s not on leave; he’s working. It’s a working trip.”

At the exchange rate of 2.7169, the amount of US$367,150 works out to a whopping 997,510.00 EC dollars for the sole commissioner’s salary alone. When you add other expenses like first class travel between Sydney and St John’s; hotel accommodation; local transportation; fees and similar expenses for the British Counsel to the Commission; the total cost of this useless, politically driven inquiry will be well in excess of 2 million EC dollars.

Anywhere else in the civilized world, this outrage would be uncontestable ground for the urgent removal of a government from office. As UPP fanatics are fond of saying: “Only in Antigua…”  There can be no question that this case is clearer and stronger than normal given the fact that the UPP has already spent so many millions of the people’s money harassing the targets of the inquiry in a four year old court battle across three jurisdictions.

Once again, we urge Baldwin Spencer, to abandon his all-consuming ALP hate campaign and thereby set the stage for his administration to be guided by honesty, integrity and fairness in their governance of Antigua and Barbuda.

The wastage of millions on a Commission of Inquiry to feed the UPP’s insatiable appetite for state financed vengeance is as obscene as it is unconscionable. We don’t need it. We cannot afford it… and it is therefore highly irresponsible and extremely reckless to proceed with this totally unnecessary Commission of Inquiry. 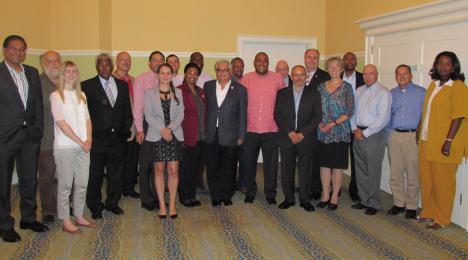 KINGSTON, Jamaica — Over 80 percent of the Caribbean Sea is polluted from land based sources and activities on land such as deforestation, untreated wastewater,…

Did Schiff Change Any Republican Minds On First Day Of Arguments? | The 11th Hour | MSNBC