Kingston, Jamaica. November 27, 2010 – Two Caribbean Journalists, Carol Francis from Jamaica and Neil Marks from Guyana will be among a global team of 35 Journalists covering the United Nations Climate Change conference when it opens in Mexico on Monday, November 29, 2010.

Hundreds of millions of people across the world will receive daily updates on the latest international efforts to tackle climate change thanks to an innovative media support programme called the Climate Change Media Partnership (CCMP). The CCMP has awarded 35 journalists from across the developing world with fellowships to Mexico to provide vital coverage of the annual Conference of Parties to the UN Framework Convention on Climate Change (UNFCCC) at the end of the month.

The CCMP programme enables journalists to report in depth on the negotiations and share their stories with millions of people in developing countries who might not yet understand how climate change will affect them.

“Accurate media coverage is essential to inform citizens worldwide about what climate change will mean for them,” says Rod Harbinson, Head of Climate Change at Panos London. “Journalists also have a vital role to play in ensuring that governments take the actions needed to prevent dangerous levels of climate change and steer the global community onto a sustainable path.”

The 2010 CCMP fellows are from 29 countries in Africa, the Middle East, Asia, the Pacific, Latin America and the Caribbean – countries that are both vulnerable to climate change and have a key role to play in addressing it. As well as receiving training and mentoring at the summit, they will take part in a media clinic, field visit and interview sessions with leading climate change experts and negotiators.

The CCMP is an alliance between Internews, Panos and the International Institute for Environment and Development (IIED). It has already supported more than 100 journalists from 43 developing nations at the past three UNFCCC meetings.

A recent University of Oxford study (released on 15 November), calls for greater support for journalists who report on climate change and stronger networks between media and climate scientists — both core goals of the 2010 CCMP Programme.

“With major international media outlets drastically down-sizing their coverage of the UN talks, the CCMP fellows will be providing a vital stream of information to a global audience,” says James Fahn, executive director of Internews’ Earth Journalism Network. “At last year’s meeting in Copenhagen, the CCMP fellows produced more than 500 stories for their media outlets and reached an audience of many millions.”

However, many of the winning journalists face major hurdles in getting to the conference. First, some have no Mexican embassy in their home nation and must travel to another country to complete their visa application in person. Second, many must also apply for US or European transit visas to complete their travel to Mexico. As at previous UNFCCC meetings such barriers continue to limit participation from the poorest and most vulnerable nations, and may well reduce the number of CCMP journalists able to attend.

The CCMP will publish stories from the UNFCCC’s COP16 conference on its website — www.climatemediapartnership.org — which has details of this and previous years’ fellows and provides a platform for their climate-change reporting.

The CCMP is not only about boosting the skills of journalists to grapple with complex climate change issues, but also to increase the opportunities they have to access and engage with leading scientists and policy-makers. The partnership has also set up an online Roster of Experts — www.climatemedia.ning.com — where scientists and other professionals can make themselves available to journalists around the world.

“World leaders lined up in Copenhagen to declare their desire to tackle climate change but they ultimately failed to look beyond their short-term interests and agree a global deal,” says Mike Shanahan of IIED. “Thanks to the CCMP programme, the eyes of the world will be firmly fixed on governments as they gather in Mexico to pick up the work they left unfinished in Copenhagen.” (End 27/11/2010) 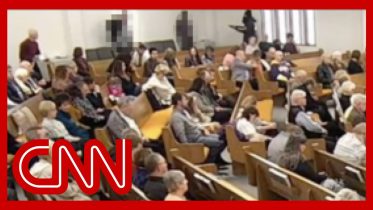 Two parishioners were killed when a gunman opened fire in a Texas church. Within seconds, members of the church security team shot and killed…

Mulvaney says ‘get over it’ after admitting to quid pro quo