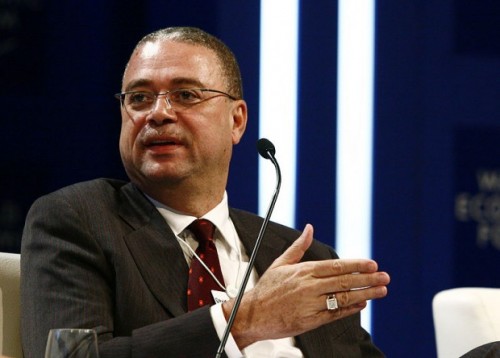 BRIDGETOWN, Barbados — THE passing yesterday of Prime Minister David Thompson marked the third time in 25 years that a Barbados leader has died in office, and the ninth Caricom Head of Government since 1967.

Thompson, a 23-year lawyer-parliamentarian, died at his private residence surrounded by his St Lucia-born wife, Mara, and their three children around 2:20 am yesterday.

He was born on Christmas Day and would have been 49 years old this December.

The statesman had been seriously ill for the past three-and-a-half months and was officially diagnosed in September with pancreatic cancer.

Deputy Prime Minister and Attorney General Freundel Stuart, who has been at the reins of government during the period of Thompson’s illness, has since been sworn in as the country’s new Prime Minister.

Thompson was a protégé of Errol Barrow, founder-leader of the Democratic Labour Party (DLP) who took the country into independence 44 years ago next month. He rose to power in January 2008 with a landslide election victory that ended the three-term rule of the Barbados Labour Party with Owen Arthur as head.

Just this past Tuesday, Arthur was sworn in as the new Opposition Leader to succeed Mia Mottley who was ousted in a bitter leadership squabble.

As a parliamentarian, Thompson had earned a stout reputation as a skilled debater, one whose tongue frequently lashed political foes, in and out of political campaigning. It was he who shouldered lead readiness-responsibility for the inauguration of the Caribbean Community (Caricom) Single Market and Economy (CSME) from January 2008 until his death.

Thompson’s passing has come at a critical period of economic and political uncertainties for Barbados with the possibility of a snap general election being called possibly in 2011.

News of his death coincided, ironically, with an editorial in yesterday’s Saturday Sun complaining about the lack of an update on the former Prime Minister’s health since his return home on October 12 from his latest visit to New York for further medical attention.

Amid the gloom over the PM’s death, there also came a report from Standard and Poor’s downgrading the country’s credit rating.

Yesterday personal telephone calls and tributes poured in for Thompson from across the Caribbean and beyond.

Golding who is Chairman of the Caribbean Community (Caricom), the regional grouping, described Thompson as one of the region’s “youngest and most vibrant leaders” and said that in the space of less than three years, he had demonstrated strong leadership within the councils of Caricom. He was firmly committed to the region’s goals.

“He fought a brave fight to the very end, demonstrating the unconditional love for his country and a commitment to the people of Barbados. His will be a great loss to the region,” said Golding in a statement.

Simpson Miller also extended condolences to Thompson’s family and to the Government and people of Barbados. She hailed him as “a true son of the Caribbean who during his life had been an inspiration to so many people”, and as one of the region’s most integral member who embodied “great hope and potential”.

“I am saddened by the news that Prime Minister David Thompson of Barbados had died…All of us had hoped that his health would have improved. In the end it confirms the mortality of the human being,” Simpson-Miller said in her statement.

(Traces Of Radical Island Sensibility) In my January 2009 publication titled As She Returns, I summarized remembrances of a conversation held with my Mother in…