When I heard Shane Shillingford was in Delhi for the India/West Indies encounter, I remembered brief moments in his journey and his ultimate resilience. With discipline, a Dominican can do anything, I thought.

There’s too, something in Shane Shillingford’s bowling that’s quantum cool.

Well, here’s the extract as it appears in my book An Unassuming Love: Black Memory, A Traveloguer And Cricket (www.steinbergh.com & www.xlibris.com)

Mythology has it that when India cried, a healthy tear was Sri Lanka – in the context of passion and romance, I must admit Sri Lankan women carry names that sound nectar-laden. Dominica’s Shane Shillingford bowled at Galle in that land of beautiful women taking 4/123.

When did ICC officials first observe Shane’s yardy actions? Was it in Trinidad, at Kensington, at Warner Park? When did the trace begin? Did it suddenly – the above-normal angle which produced 4/123 – appear as if elicited, as novel Third Millennium thrust of spirit in arm, yet inconsistent with ICC rules of engagement?

Hold here. This is unassuming. Like James, it can barely stick to the pitch’s parameters, but I’ll try in the context of communal resurrection.

Shane Shillingford bowls in Sri Lanka and after that first test, an outside-the-boundary action was mystically pressed into his hand and had to be intercepted and remedied as if bearing traces of disease and thus imbalance. This text hands you a bouquet Shane, compliments my favourite island florist who knows Haiti’s rich mulatto and designs interiors of their mountain dwellings.

On Tuesday December 21, 2010, a story begins to make its rounds – the West Indies off-spinner Shane Shillingford has been “banned” some say, while others use “suspended.” Dublanc stopped not in response to the linguistic inexactitude, but both words said something was not right and their son had met some difficulty overseas. The cedar drums vibrated like Sammy’s cell-phone.

If he was suspended, they would take him back, but if he was banned he would not be allowed to return to the team, the old man mused. Suspend. Ban. Which one was it and why were the headlines using both when they’re different? Could a suspension lead to a ban if the action leading to the suspension was not remedied, if there was no rehabilitation as if a disability was spotted by the acclaimed discoverers of cricket?

When I heard the breaking news on Dominica’s Q95’s Hot Seat with matt Peltier Jr., I flowed intuitively and moved to the Caribbean Media Corporation (CMC) on line to see whether the Shillingford story was in. It was after 8:00 am.

Just above the ‘just in in sports’ section was a story highlighting a dual-citizenship matter in which Dominica’s Prime Minister was embroiled. That was the Dominican significant event for CMC, not Shane Shillingford.

The sports story on that page, at that time, originated apparently from St. John’s, Antigua and was headlined, ‘Sarwan Returns In Thirty-Man World Cup Squad’. Sarwan. I googled both the Jamaica Gleaner and the Jamaica Observer and the story had not appeared, though there were references in both to the matter that had drawn the early comment of Reginald St. Havis Shillingford and later Ossie Lewis in his conversation with Dominica Broadcasting’s Ted Dailey.

I searched to find the Trinidad Express in a November 21-22 report, stating that “if in an independent analysis, Shillingford is found to have bowled illegally, then he would be suspended from bowling in international cricket, until he undertakes remedial action and is reassessed.”

In part, Shane’s action was adjudged crude. I could not settle for remedy since it was not a pathology, neither was it deficient, but simply had to be managed on account of its super-abundant energy flow.

Illegal in this bowling context, could also mean not in keeping with a sort of graciousness, a cultured subtlety. Bounce, but do not throw.

Guyana would have something, I thought. Stabroek’s story was headlined ICC bans Shillingford for illegal action’. Ban. To prohibit particularly by official decree. Sounded rather Romanesque, but was different from a suspension. The Stabroek story came from Reuters in Singapore – I mean by that time in the morning, www.windiescricket.com had not updated its site to accommodate the battle cry!

Shane Shillingford had been “banned” from bowling in international cricket because of an illegal action “the sports governing body ruled today.” Is a rule a law in cricket? I gather. According to Stabroek, “the 27-year-old from Dominica, was reported by on-field umpires Steve Davis and Richard Kettleborough after the Galle test ….”

“A comprehensive analysis revealed that his ‘mean elbow extension’ was 17 degrees which is above the 15 degrees level of tolerance permitted under the relevant regulations,” the ICC stated. Levels of tolerance, rules, regulations and laws.

C L R James needs that we think beyond a boundary and its drawn battle lines, the rectangle that is the pitch, curvature of the hand attached to a human body subject to its history. It is a body that I believe can learn, adapt, adopt, incorporate in the true sense of grafting and internalizing and applying with awesome energy hailing now in Shane’s grip and fiery tweaked release.

Be the first to comment on "A Dominican Can Do Anything, I Thought." 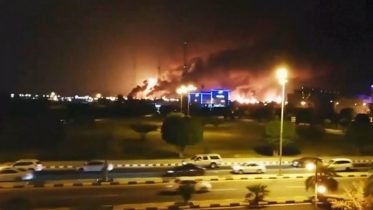 Tensions high after Iran blamed for attack on Saudi Arabia